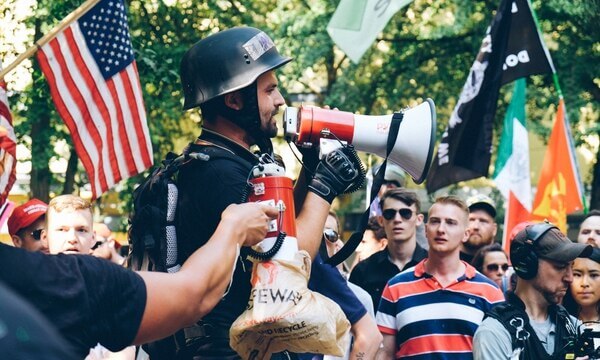 I’ve had an ongoing conversation with Joey Nations who is, again this year, running to be the Oregon Republican Party’s candidate for Oregon’s 5th U.S. Congressional District. I imagined writing a piece that would be a quasi endorsement. Yet, I would also discuss how his views on economics depart from the Party of Reagan that I promptly registered an affiliation with on my 18th birthday in 1992.

I cast my first vote in an OR-5 primary race twenty-eight years ago, voting for Jim Seagraves, who would win the nomination and face the incumbent Michael Kopetski. Like most Republicans who have run for this seat, Seagraves lost.

Seagraves was a free-market economist, and it’s worth taking time to look at his old Oregon Voters’ Pamphlet entry here. There is no hint of populism in that candidate statement. There is no rage against the elites, the establishment, the media, or the freedom of Americans to purchase from whomever they choose. Seagraves also had some class and accomplishment, as did every ORGOP nominee for this race until 2018.

And that explains why I voted for Joey Nations in 2018. The alternative was Mark Callahan. Neither matched my free-market worldview, but at least Joey Nations has been able to hold a day job. When I vote in a primary where the choices are largely indistinguishable policy platforms, I vote for the most professional and dignified person in the race.

Nations was clearly that in 2018. I expected this to remain the case. Then something happened that has given me pause. Nation’s wasn’t able to get an entry in the Voters’ Pamphlet this year. For candidates that don’t, an absence signals something about the seriousness of a campaign, but the way Nations has explained this signals something worse to me. Here is what he has been saying:

Oregon’s RINO Secretary of State DOES NOT want you to see my candidate statement! Here it is. Election engineering folks. I’m on the ballot but not in the voters pamphlet. Despite turning in my signatures on time they statutorily denied even a review of my signatures based on staff/time shortages. BS!

I turned them in on time and they should’ve been reviewed. They denied me because they know I would shed light on the voter fraud they oversee in Oregon every year. Who caught the Marion County clerk who counts all our votes at an impeach Trump rally? Me! Who exposed Oregon’s RINO Secretary of State Bev Clarno? Me! No wonder I’m a target as the ONLY TRUE GRASSROOTS candidate.

If any Oregon Catalyst reader really believes this was “election engineering” on the part of Secretary of State Bev Clarno, please post your reasoning in the comments below.

There is obviously more to this story. The signatures are for a petition to get a candidate’s fee waived. I actually don’t think there should be such an option. I would prefer the Voters’ Pamphlet to be self-funded and expect politicians to pay their own way. The sudden disruption in the Secretary of State Office’s operations due to COVID-19-related shutdowns ordered by the Governor prevented the auditing of signatures. So Nations was asked to pay $2,500, and for whatever reason, he didn’t do so. I reached out to Joey Nations to get more detail that might indicate how his situation was unique from all the other campaigns that, on short notice, were told to pay up and did so. I got no response.

In Paul Romero, we have a fine man running for the U.S. Senate. He too had the signatures needed to get his fee waived. Instead, he was told to cough up the money, and Romero did what it takes to be in the Voters’ Pamphlet. Senate candidates have to pay a slightly higher fee of $3000. In terms of bang for the buck, that’s probably the best three grand a Senate campaign could spend. A Voters’ Pamphlet entry is equally critical to a Congressional race.

It remains an open question if state officials handled this properly. Even if they didn’t, I have a hard time believing that, had this happened in 1992, Jim Seagraves would have been spreading stories about how the Secretary of State and Marion County Clerk are out to get him. It’s one thing to adopt our President’s market-intervention policy positions. Adopting his temperament is worse.

I may still vote for Joey Nations. Why? I’ve met him. Having attended a Christmas party he hosted last year, Nations has struck me as a level-headed professional in real life. I think this street-brawler routine is just an act.

In 2018, he lost to a guy on food stamps. I suspect the lesson Nations learned from his first run was that to get the nomination he had to project the most cartoon character image of being the alt-right candidate. At that Christmas party, I instead saw the Joey Nations whose day job is crunching numbers as a tax policy analyst at the Oregon Department of Revenue.

The smart money hasn’t seen the same thing I have. Oregon Right to Life and the Oregon Firearms Federation are backing Amy Ryan Courser, a former Keizer City Counselor who advises the minor league baseball team the Salem-Keizer Volcanoes. I don’t see anything particularly promising about her. Maybe she gets professional support solely because she doesn’t wear German WWII helmets at alt-right rallies.

But Courser was able to distinguish herself by doing one thing. She managed to get a candidate statement published in the Voters’ Pamphlet. Maybe that’s only explained by a secret conspiracy of the Secretary of State, but my intuition tells me it’s entirely explained by Courser’s ability to pay a relatively small fee.