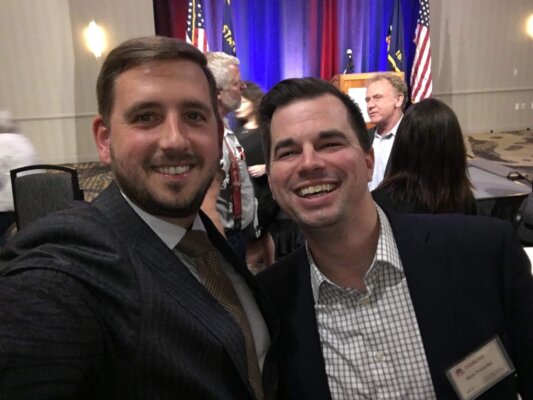 A Portland-based podcast, The Rational Republican, which takes a look at the news, issues, and campaigns for conservatives here in Oregon and discusses them with a measured and reasoned tone, is featuring two local legends in their most recent episode.

James Ball, Republican candidate for House District 36 and Nick Prelosky, were able to sit down with Allen Alley and Jim Pasero to discuss the damage being done to the economy and policy prescriptions for handling China going forward.

The four gentlemen were able to have a clear and engaging conversation about where we are now, as many states are beginning the process of reopening and Oregon is lagging behind, as well as what can be done from a federal perspective about how to address the growing concern posed by both China’s growing influence in the world and their continuous disregard for engaging with the international community in a constructive and bilateral manner.

Alley is a chairman emeritus of the Oregon Republican Party and candidate for several offices, including governor and state treasurer. He’s been a fixture in politics and the business community for decades here in Oregon. Pasero has hosted a radio show on Sunday mornings for years in which he’s able to cover the news and discuss the issues of the week. He’s a former candidate for a seat in the state house and was the chief speechwriter for the Republican National Committee during the presidential campaign in 1992.

The guests are two of the hosts of the recently renamed Abrams, Alley, and Pasero Show, and are venerable voices in Oregon politics who have years and years of policy experience and communications consultations to draw on. The show airs every Sunday morning from 8-10 on KXL in the Portland area.

Alley has also worked engaged with China frequently over the course of his business career, and is able to draw on his myriad conversations throughout the decades and many trips to China and countries throughout the region. The insight that Ball and Prelosky are able to draw out of these experiences serve listeners by providing quick and succinct talking points, as well as a deeper dive into the underlying issues and where more resources can be found by those individuals wanted to continue to learn more after the episode is finished.

When can we expect Oregon to open up and have the economy starting to run and getting people back to work? How can Donald Trump best handle the transgressions of the Chinese? What can Republicans advocate for from a conservative policy standpoint? These issues and many more are contained in an engaging and entertaining episode, be sure to check it out at www.jamesaball.com or by searching for “The Rational Republican” on iTunes, Google Play, or where ever you get your podcasts.