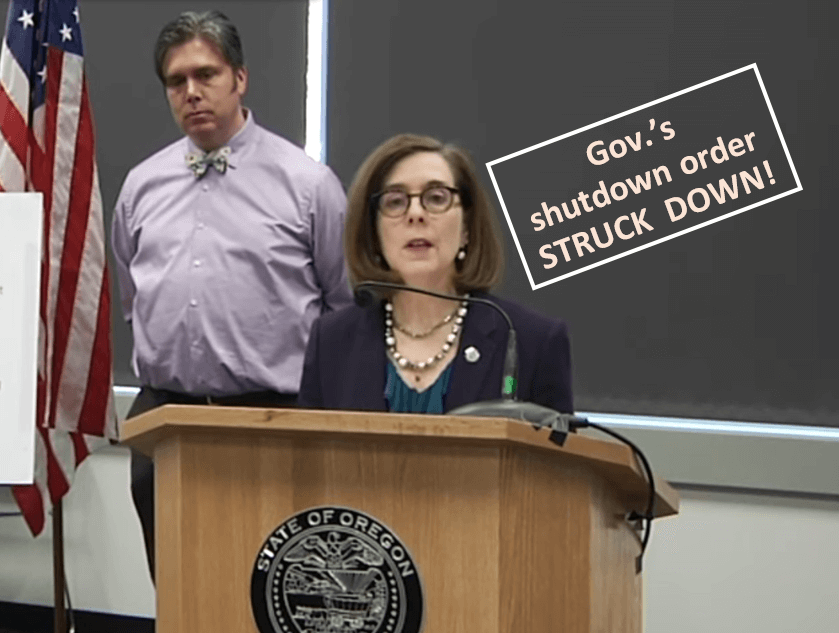 A lawsuit on behalf of many Oregon churches, Kevin Mannix and the Pacific Justice Institute was decided as the Baker County Circuit Court Judge ruled Governor Kate Brown’s coronavirus shutdown executive order went beyond her authority as a Governor.  This follows on the heels of a Wisconsin judge striking down their Governor’s orders. The Governor has already announced plans to appeal the decision. Here is a press release from the Pacific Justice Institute

The orders resulted in church, business, and school closings and required the citizens in Oregon to remain under virtual house arrest. The Oregon law gives the Governor broad authority in emergency situations; however, that authority is of limited duration. The Governor did not go to the legislature to seek additional time as required by law.

Brad Dacus, President of PJI, stated, “We are thrilled with this decision in Oregon and believe it upholds the rule of law by requiring the Governor to comply with clear limitation placed in the statutes.” Attorneys for the Governor are now vowing to appeal to the Oregon Supreme Court. “Pacific Justice Institute is committed to seeing this case all the way through to its final conclusion,” Dacus said.

Ray Hacke, PJI’s Oregon-based staff attorney who argued the case on behalf of churches filing suit, commented, “Even in emergencies, there are limitations on the Governor’s power. The Governor exceeded those limitations and the Court rightly recognized that.”

In a seven-page opinion, Shirtcliff wrote that the damage to Oregonians and their livelihood was greater than the dangers presented by the coronavirus. He also noted that other businesses deemed essential, such as grocery stores, had been allowed to remain open even with large numbers of people present and have relied on masks, social distancing and other measures to protect the public.

A 2012 amendment to the Oregon Constitution does enable the governor to declare a “catastrophic emergency,” and public health is included but not defined. It was intended to deal with a natural disaster, such as a severe earthquake off the Oregon coast. Under its terms, the governor’s emergency has to be renewed by the Legislature after 30 days.

Please provide us your thoughts below or on Facebook.