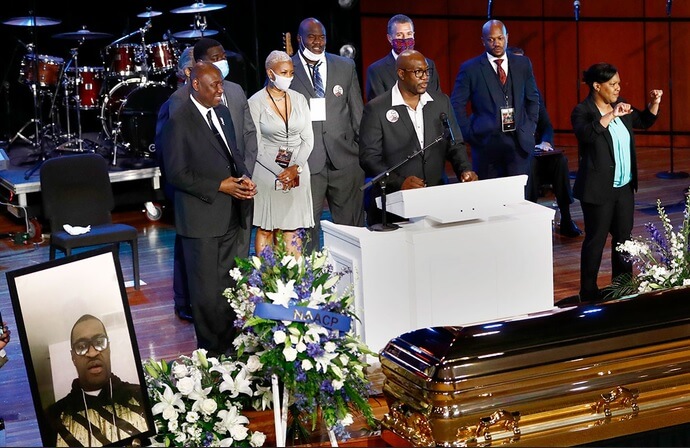 In this time of listening and understanding we highlight some of the thoughts spoken at George Floyd’s funeral and memorial:

As Thomas Jefferson said in the bill of rights, all Americans are given the Inalienable rights of life, liberty and the pursuit to be happy on this earth. That’s all George was asking for like any and all of us. As Jefferson said in the Declaration of Independence, that inalienable rights endowed by our creator, rights to life, liberty and pursuit to be happy on this earth. But he was denied those rights. We will seek justice in his name. We are all united as a people who are God’s children seek justice in his name. But beyond the specific justice in his case, in his case, the prosecution of the four individuals who deprived George of his life, we seek a broader, more transformative justice. A more just system of policing. A more just treatment of people of color. A more just criminal justice system.

In essence what we are endeavoring to do is what my personal hero Justice Thurgood Marshall said: “Make the constitution real for all Americans”.

I appreciate the love of everyone in here. And as the state of Minneapolis you all have adopted my brother and showed him so much love. And we feel that love in your city and thankfully everybody and plus around the world. It’s a beautiful thing. It’s a great love we’re receiving and George Floyd is receiving. ‘Cuz he would love it. I wish he was here and present in the flesh to see it. Because all of this great unity he – he would bring you to tears like its bringing us.

We come from a large line of large family members. We didn’t have a whole lot but we always had each other. We always were taught that we could always bring other people into the fold. Always. No one should ever go home without having a meal or having food. …My aunt was someone in the community …all the kids liked to come over there. She ended up having 30-40 kids that would come over there to have food and feel loved and be part of the fold. We were raised to always welcome people in and embrace other people. You could see that all of these people, no matter who you talked to, they will always say the same thing, George always was somebody who welcomed people and made people feel like they were special and no one felt left out.

“It’s been building up for all of American history. I think that people who are aware of the history of this country understand that there’s a lot to atone for and a lot to celebrate in terms of people who stood up for justice.”

— Here are some of the other “New Voices” articles we published highlighting what others are saying: