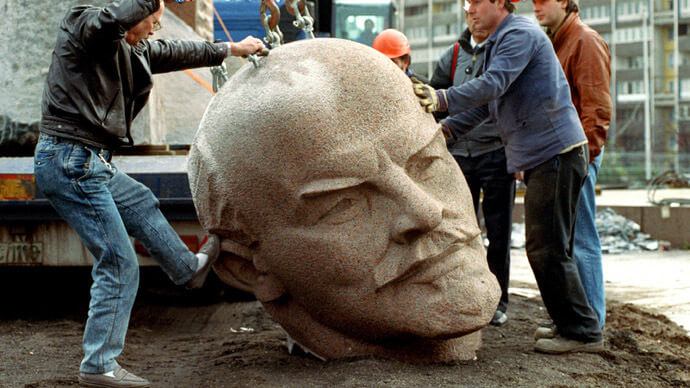 If a monument is ancient, it will tell archeologists a little about the civilization that left it behind, but not much. A garbage dump usually offers more reliable information. The inscriptions on Egyptian monuments tend to exaggerate the true accomplishments of a Pharoah.

When the Russians tore down statues of Lenin, like the one pictured above, that didn’t erase the leader of the Bolsheviks from history. It merely stopped the veneration of someone unworthy of veneration.

Rather than teach history, monuments speak about the present. If you want to know the history of the short-lived Confederate States of America, read a book. There is no need to defend 21st-century adulation of Robert E. Lee, let alone Nathan Bedford Forrest. These statues are not even contemporaneous to the Confederacy. The few oldest statues were erected to celebrate the end of Reconstruction. Most were put up in the 1950s and 60s as symbols of segregation when that silly system of government regulation came under attack by the Warren Court. Defending these icons of oppression is not a defense of liberty.

There is a reasonable argument to be made that mobs should not be allowed to tear down statues. If a statue should come down, it should be an orderly decision made by the appropriate authorities, not an act of vandalism made by passionate passers-by.

But when the question is asked in the proper setting: Should we continue to honor the losing side of the American Civil War? That’s an easy choice to make – no.