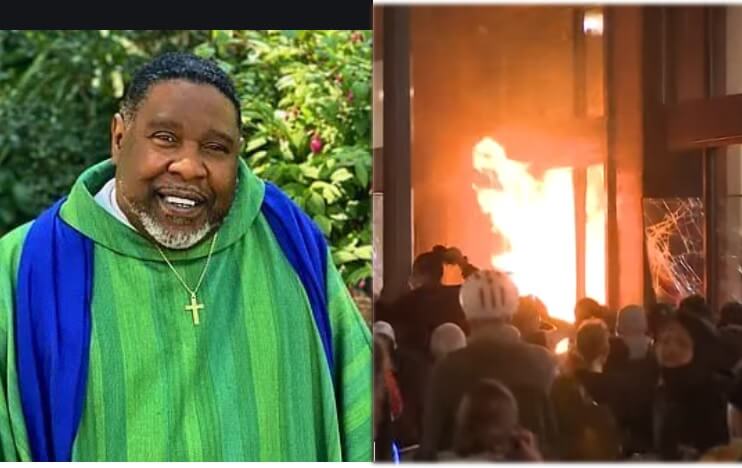 Here is what the Portland NAACP, Ed Mondaine, wrote in the Washington Post,

“Images of “Naked Athena,” as the protester has been labeled, have gone viral, her unclothed confrontation with police earning her accolades as a brave ally of the cause. But I see something else: a beneficiary of white privilege dancing vainly on a stage that was originally created to raise up the voices of my oppressed brothers and sisters. In this, she is not alone. As the demonstrations continue every night in Portland, many people with their own agendas are co-opting, and distracting attention from, what should be our central concern: the Black Lives Matter movement.

Unfortunately, “spectacle” is now the best way to describe Portland’s protests. Vandalizing government buildings and hurling projectiles at law enforcement draw attention — but how do these actions stop police from killing black people? What are antifa and other leftist agitators achieving for the cause of black equality? The “Wall of Moms,” while perhaps well-intentioned, ends up redirecting attention away from the urgent issue of murdered black bodies. This might ease the consciences of white, affluent women who have previously been silent in the face of black oppression, but it’s fair to ask: Are they really furthering the cause of justice, or is this another example of white co-optation?”

[He then explained what should be done instead]

“I am not suggesting retreat. Instead, I am proposing that we take the cause of Black Lives Matter into those places where tear gas and rubber bullets and federal agents cannot find us, and where there is less risk of spectacle distracting from our true aims. In boardrooms, in schools, in city councils, in the halls of justice, in the smoky backrooms of a duplicitous government — that is where we will finally dismantle the gears of the brutal, racist machine that has been terrorizing black Americans and hollowing out the moral character of this nation since its inception.”

“Others, like Danialle James, a North Portland resident and a consistent presence since the protests began on May 27, said the evolving landscape poses a dilemma:On the one hand, the federal government’s tactics, encouraged by Trump, have reinvigorated the protests in Portland. On the other, the focus has drifted from police brutality against Black people. “It’s turned toward, ‘Let’s get these feds out of here now’ more than George Floyd per se,” James said.“We need to shift the focus back to why we were out there originally,” she said.”