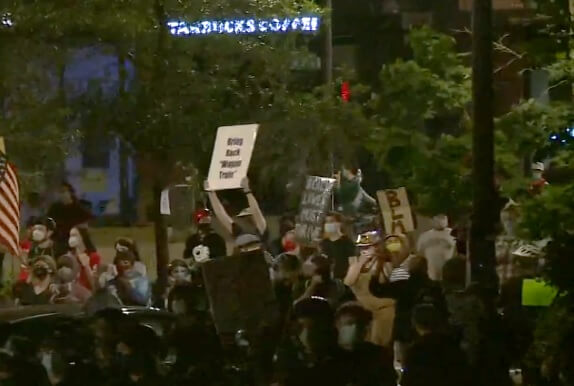 While attending the Portland riots this weekend, there were many statements that seemed unique and odd.

“We will make America great because America never was great”

This was said by one of the speakers who was running for office. On one hand, it was strange that she was trying to co-opt the most iconic campaign slogan of the President which is by far the most hated man at the rally. On the other hand, it was strange to hear someone say bluntly that all of America’s success and progress is a failure and if you just do what they say and start over again from scratch (which is a much repeated phrase) then and only then can America be great. Even liberal success (Obama’s historic election, Obamacare, etc..) was not great, only greatness can be achieved if you do whatever they say next.

“If you own a blue Honda, your car has been broken into”

It is a peculiar thing at a riot, known for violence, anarchy and looting, that the speaker on the bullhorn announces that vehicle was broken into and that even explained that his own truck was recently attacked. The speaker tried to implore the audience to take responsibility and look-after each other’s vehicles while they protested. Who would have guessed that an assembly of anarchists would have a problem of people breaking into each other’s cars?

“We need to raise money for AJ”

The speaker said that a fellow young protestor, named AJ, injured himself over the weekend while pulling down the security fence protecting the Justice Center. The falling fence critically injured his leg. The man did not have health insurance.

You can sense at the protest itself that many who riot consider everything to be a game or a joke but it is quite dangerous and deadly. Everyone is getting hurt (press, police, bystanders) when anarchist start a riot.

Even though AJ was rioting, I was still saddened he was hurt and it reminds me of my own younger liberal years where I made many mistakes. It also reminds me on how important our free-market and liberty based ideas are needed for a younger generation.

There were other bizarre quotes at the riot such as “No good cops” and “Good cops leave”. You can read about them here “Being tear-gassed at the protest last night” .