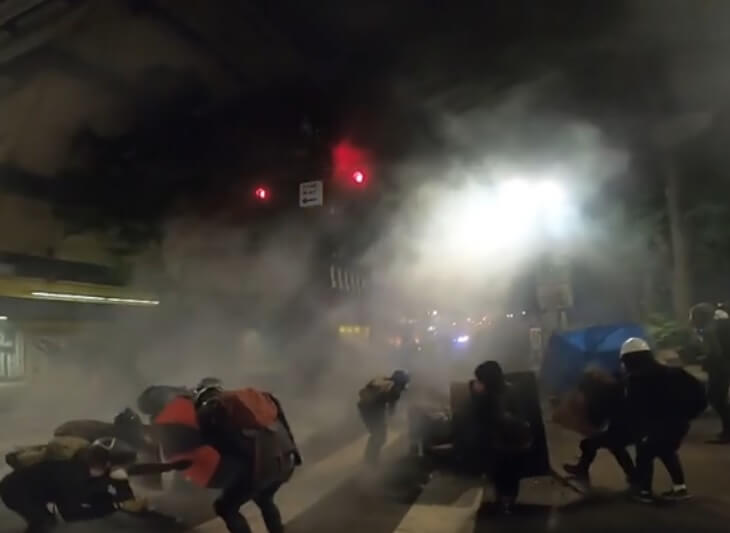 I went to the Portland protest last night for a time of listening and observing as I had previously done for the Seattle Autonomous Zone but things quickly turned interesting. I heard the public warnings from a loud speaker from the Federal Courthouse and then suddenly there were tear-gas containers landing out of the sky with one right next to me. At first, I thought, “This seems no big deal”, then the gas impact hit and it stung. It smacked my senses with the most crude and disturbing feeling.

Within seconds protestors were able to round-up the billowing gas containers and throw them back towards the Federal Courthouse from whence they came. Then a devoted group of leaf-blowers were dispatched to keep the smoke there. The counter-measures helped, but the tear-gas seemed to remain everywhere no matter how clear the air looked. It stung long after the clearing.

The much controversial and debated tear-gas had the desired effect of breaking up the crowd and sucking the strength out of a riot during the time I observed. Massive flash-bangs also seemed to break up people’s chanting and disorientate people’s attention. After three episodes of tear-gassing, it seemed that half the crowd just got up and left. Now I better understand why police really appreciate tear-gas and why protestors loathe it so much.

Witnessing hundreds of people bang and pull on the fence protecting the Federal Courthouse helped to show me the gravity of the problem local law enforcement has in protecting their Justice Center and the people inside. Only by seeing it with your own eyes can you truly see how dangerous it is to try to guard against a riot.

Earlier, I was able to listen to several hours of speakers. Interestingly, one Black Lives Speaker said people should stop throwing rocks at the Federal Courthouse and asked what it actually achieved. He curiously said what good will happen if the whole building comes down. He spoke of the need to work for more constructive avenues like joining their community gatherings at NIKE and also working to elect black candidates to every level of office.

Despite some inspirational moments from some of the speakers, there was an alarming barrage of anti-cop messages, chants and vitriol by most of the late-night speakers. You had chants of “F*ck the police”, “No cops, No KKK, No racist USA” and “No good cop in racist USA”. In all my political life, and having had many different political views, I’ve never witnessed such public speaking devolve into unadulterated demonizing and dehumanizing of a particular group (not even among groups I disagree with). This cop-bashing went on for hours. At the same time, you were surrounded by an ocean of anti-cop graffiti such as “Kill cops”, “Dead cops”, “Fry little piggies” and “Run over cops” with your car. The public needs to know that part of this rioting includes outright dangerous dehumanizing of people and threats of violence against them. This reflected pure hatred and vile propaganda. I worry that people are going to get hurt.

I kindly asked one protester to help me understand her sign that read “Good cops quit”. She said that all cops are bad and that if you are good person you should quit because you are just hurting people as long as you are cop. She desired to have various experts (counselors, de-escalators) replace police altogether. I respectfully inquired on who should be called if there is a mass school shootings. She replied that mass shootings are statistically insignificant to justify having police. I then asked a simpler question on who should a woman call if she is a victim of violence. She said the cops are more of a violence to women than criminals. She then began talking about the whole idea of policing is a white male patriarchy racists system (I am not making that up). To her, the system is evil entirely and needs to be abolished. Finally, I asked her if there were any examples in the world where this has been tried. She could not.

– Man with “stop excessive abuse of our first amendment” sign

I kindly asked this man to explain this sign to me and he explained that the abuse by police and use of tear-gas against protesters was violating the First Amendment right to assemble. He said police should not use tear-gas because if rioters breach the Federal Courthouse fence because they won’t be able to get inside the building anyways. I mentioned that they already broke in once and set fires in May and just a few days ago were able to break a window and start shooting flammable materials inside. To me, it was another example of a detached political reality where the world should work a particular liberal way and ignoring how it is working right in front of our faces as we speak. It is as if he knew that hundreds of violent protestors would indeed get inside the Federal Courthouse and wreck havoc, but by believing strongly enough in a certain political vision of humanity it would magically not happen. It made it so difficult to find common ground to work with him.

— I deeply appreciated the conversation I had with the sign wavers and other protestors at the protest. Obviously, we had extended conversations on other topics that were helpful and insightful. These were not experts but ordinary people who were good natured and willing to spends hours deep into the night for what they believed, but their answers were very similar to other protests I visited. I share these highlights because it demonstrates the massive gulf in thinking that divides us. The gulf is so large it makes it difficult for me to try to find ways to work together. The same gulf seemed to re-appear with each person I talked with. Also, it must be noted that I visited the protest during the dark hours and many commentators say the message of speakers and participants changes significantly from day to evening. These are anecdotal stories and should treated as such.

Photo: From news footage as my camera photos did not turn out due to lighting and the goal of not taking lots of pictures but of listening.