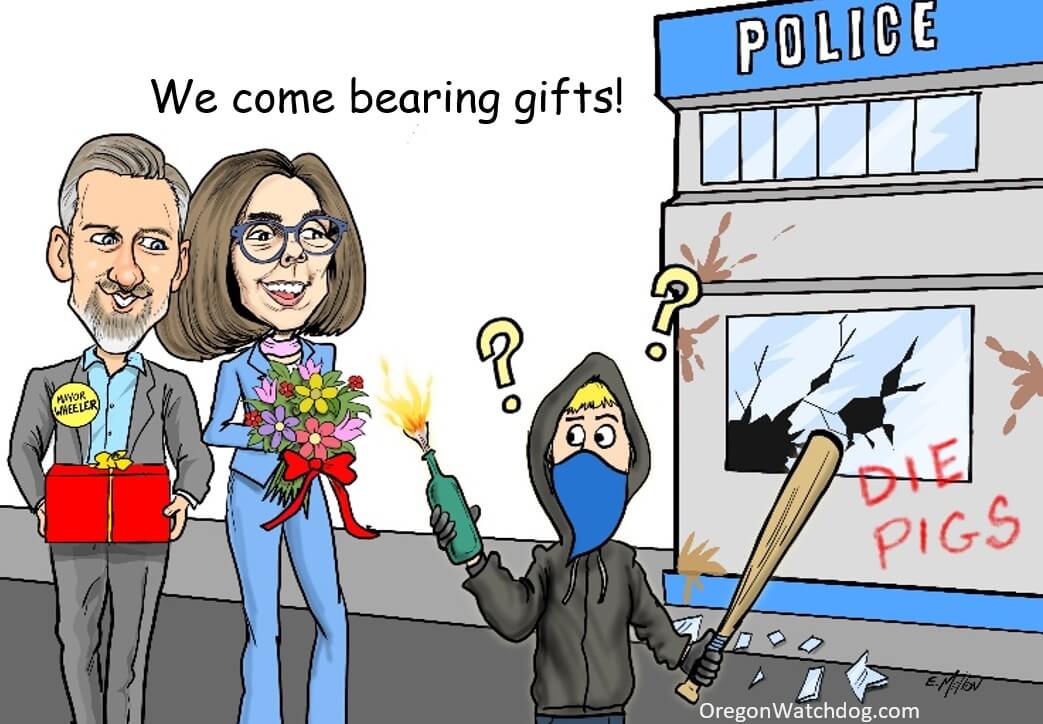 As the protest hit 100 days , often with violence, rioting and arson, we realize that our lawmakers have been doing everything the protestors wanted.

#1. De-fund Police. Portland was only among a few cities in the entire nation to significantly reduce police funding. They cut $12 million and cut 100 positions.

#2. De-fund police to help fund communities.  This is what the City of Portland did by taking $12 million from police and dedicating it towards new social service programs.  Oregon has announced $62 million of CARES ACT are being distributed just to Black Oregonians.

#4. Pulled National Guard. National Guard was used in the early days in Portland, and protestors criticized, so Portland Mayor Ted Wheeler pulled them from use.

#5. Pulled Federal agents. Protestors complained on the increased use of Federal agents (US Marshals, ICE security) on protecting the Portland Federal Courthouse and within a few weeks they were replaced with State Police.

#6. Reduce mass incarceration. Governor Kate Brown responded to the calls of less prison by issuing a public statement calling for reduced prison time to be among her priorities in the next Legislative Session.  Gov. Brown will likely make good on this promise since she has already reduced prison sentencing for several drug crimes, auto-theft, property theft and ID theft.

#7. Reduced tear-gas use. Protestors complained about police using tear gas to disperse rioters, so Portland City Hall created new limits on their use.

#8. More dialogue. Protestors complained of not meeting with with their elected leaders, so Ted Wheeler went out of his way to personally meet with protestors and joined them at their rally and endured being hit with tear gas.

#9. Backing off riot enforcement.    Protestors complained that the police were too aggressive with rioters, so noticeable changes were made.  On several occasions protestors were allowed to take over streets, throw objects at police and vandalize private and police property, sometimes for hours, before police intervened.  Just yesterday the police were noted for their limited approach.

#10. Release protestors.  Multnomah District Attorney Mike Schmidt, did just that when he dropped over 400 criminal charges against violent protestors.  This represented most of the 500+ protest charges that were brought before him.

Oregon should be recognized for the extraordinary measures to meet demands of protestors, far greater in measure than just about any other community in the nation.

Here is how protestors responded

— They set afire to an apartment building with people inside

— They tried to block a police station door while they attempted to arson the building.

— They rammed a police vehicle with two officers inside.

— They created such general lawlessness that attending protestors robbed a person and then beat unconscious the man who tried to help the victim and attacked the girlfriend of the man trying to help the man who was being robbed.

— They hunted down and murdered a Trump supporter in the middle of the street.   When news broke out about the death, the protestor crowd cheered the man’s death.

Oregon should be recognized for how protestors responded.