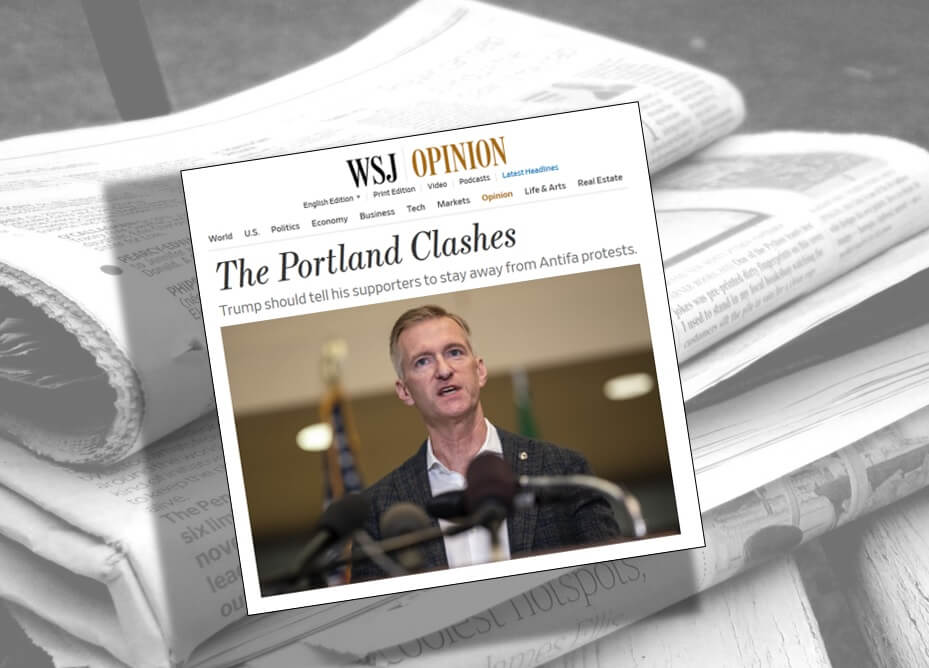 Once again the nation’s top subscription newspaper, the Wall Street Journal (3x size of NY Times), issued a harsh rebuke of Portland Mayor Tom Wheeler and Governor Kate Brown and his handling of the Portland protest in light of the recent homicide.  It was just last week when Portland Mayor Ted Wheeler held a press conference where he complained Portland was reviving bad publicity from the Wall Street Journal Editorial Board for a previous Editorial weeks ago (newspaper faults Portland over riots ).

The Journal Editorial Board also had some advice for President Trump as well.

Here is a sample of the editorial:

The main failure here lies with Portland Mayor Ted Wheeler and Gov. Kate Brown, who have consistently indulged the rioters. Every night for more than 90 days, Black Lives Matter and Antifa protesters have demonstrated in Portland. Many are peaceful, but a hard core have repeatedly attacked police and burned buildings.

When President Trump sent federal law enforcement agents to Portland this summer to protect federal buildings, the mayor and Governor blamed Mr. Trump for the violent clashes. But when federal agents stood down, the violence continued against Portland police and property. On Friday Mr. Wheeler issued an open letter rejecting Mr. Trump’s latest offer of federal help to restore order.

“We don’t need your politics of division and demagoguery. Portlanders are onto you. We have already seen your reckless disregard for human life in your bumbling response to the COVID pandemic. And we know you’ve reached the conclusion that images of violence or vandalism are your only ticket to reelection,” Mr. Wheeler wrote.

Yet his city is the one burning and where someone has now been killed. Mr. Wheeler, Gov. Brown and state lawmakers have hamstrung police by limiting anti-riot tactics. At a Sunday press conference the Portland police chief said his department lacked the resources to separate the fighting factions, but the feckless Mr. Wheeler offered little more than a plea against violence and rhetoric about reform to address racial injustice.

That hasn’t stopped Democrats from blaming Mr. Trump for the violence, as they did all day Sunday. Democrats spent their convention never mentioning the urban violence, but after the Kenosha riots and the GOP convention, this has become a political liability. So they’re pivoting to blame Mr. Trump and claim that “his America” is causing it. As if Trump supporters belong to Antifa and dominate U.S. cities.

Then the Editorial focuses on President Trump:

As he often does, however, Mr. Trump took the bait and fired off tweets that CNN and Democrats spun as incitement. “The big backlash going on in Portland cannot be unexpected after 95 days of watching and incompetent Mayor admit that he has no idea what he is doing. The people of Portland won’t put up with no safety any longer. The Mayor is a FOOL. Bring in the National Guard!” he tweeted.

He’s right about the National Guard, but Mr. Trump would help Portland and his own political cause more if he called for calm on all sides. That includes his supporters who rolled into Portland for a counter-protest on Saturday. According to news reports, the man who was killed in the streets was wearing a hat for “Patriot Prayer,” the right-wing group that sometimes clashes with Antifa.

Mr. Trump should tell his supporters to stay away from Portland, Kenosha, Wis., and other cities where rioters reign. Democrats and Mr. Trump’s media opponents will take any opening they can to make alleged vigilantism the story rather than the failure of progressive Democratic governance.

The President can continue to offer local officials federal help if they want it. And he should offer sympathy for the people of Portland, Kenosha and other violent cities who have been let down by state and local leaders.

The Editorial finishes by saying that vigilantism is a result of politicians allowing lawlessness.  The Editorial concludes:

Yet mayors like Ted Wheeler have let it happen. Inevitably, average citizens will move to defend themselves if elected officials won’t protect them.

You can read the full editorial here.

Note: USA Today is the nation’s most printed newspaper, but for subscription/delivery The Wall Street Journal is #1