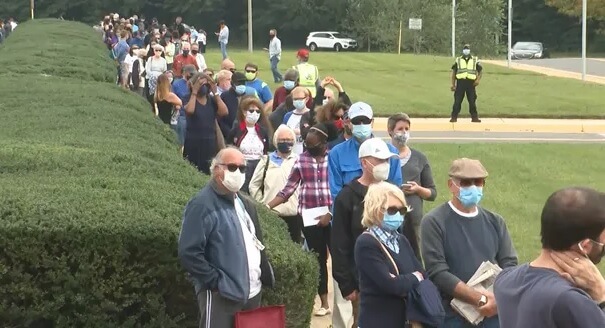 The three cities most famous for the protest riots are all witnessing high voter activity.

The Washington Examiner reports that Portland is on pace to see record voter turn-out this election. Already nearly 1 in 4 voters have already voted in the county and the election is still eleven days away.

Kenosha County has had double digit new voter registration growth and was the second fastest among the 72 counties. This County, which is Wisconsin’s 4th largest, is helping to drive record voter turnout in the state. The Chicago Tribune reports,

“The mail ballots already returned in several states dwarf the entire total in prior elections. In Wisconsin, more than five times as many mail ballots have been cast compared with the entire number in 2016.”

Minneapolis is seeing a record pace early voting as of three weeks ago.

The higher voter registration and turnout in these areas compared to others may be linked to the riots and the signs of a possible “restore law-and-order” vote.

People forget that the protest of a local police station  we see on television involves more than just one location but can result impacting a near 30 block radius of clashes between rioters and police.   Below is a map of the 100th protest night on how a single night’s protest broke out into the neighborhoods with protestors trying to evade police and police setting up road blocks to stop them.   These clashes and dueling bullhorns could almost be heard for miles away.

I believe these 130 days of police clashes in multiple police stations across Portland is helping to drive voter turn out.

We shall see what message these voters send.