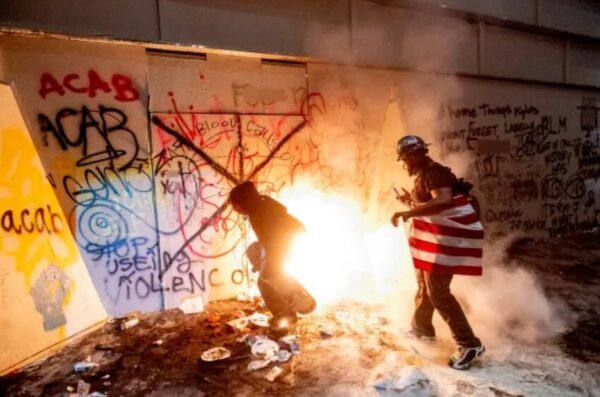 Is the media coverage of the protesters more negative than before the election?

A few weeks ago when protesters desecrated two Portland statues, The Oregonian went out of their way to provide full detailed explanations of the rioters motivation.

“As the crowd reached the South Park Blocks, some threw chains or ropes on the Roosevelt statue, a bronze sculpture officially titled “Theodore Roosevelt, Rough Rider,” …Over the course of his life, Roosevelt expressed hostility toward Native Americans, as Indian Country Today wrote in an accounting of his attitudes and policies. He pushed policies that promoted assimilation into white culture including the allotment system, by which Native American land was allotted to those who became U.S. citizens and the remainder was made available to white settlers. The policy also weakened tribal governments, an effect reportedly cheered by Roosevelt. The group then turned to the nearby Abraham Lincoln statue, pulling it to the ground at 8:59 p.m. Spray-painted on the base of the statue was “Dakota 38,” a reference to 38 Dakota men executed after the Dakota-U.S. War of 1862 in the largest mass execution in a single day in American history. (Lincoln commuted the same sentence, handed down by a military tribunal, for 265 others.)..protesters nationwide have targeted statues as symbols of longstanding oppression”

While laying out all extremism of our President’s past sins the Oregonian failed to list the extremism messages of the protesters as they spray painted the whole area with “Give our land back” and even “End America” messages.  There was even communist propaganda and cop threats left behind.   Is not “End America” an extremist message?   Is only Roosevelt and Lincoln extreme and not violent masked criminals destroying public art?

Compare that to this week’s post-election reporting of the protesters;

“They smashed windows at Saint André Bessette Church, whose programs support people navigating homelessness and addiction. They shattered windows at the Hoxton Hotel, which offered free rooms to wildfire evacuees in September despite facing its own financial struggles. And they broke the windows of several women-owned businesses, including Wildfang, a feminist clothing brand whose owners have advocated for reproductive and immigrant rights. Kristin Van Buskirk is a staunch supporter of the Black Lives Matter movement and praises the protesters who have demonstrated in support of racial justice nearly every night in Portland since May. But her downtown gift shop, Woonwinkel, was still one of the businesses whose windows were smashed early Wednesday evening. A group of peaceful protesters helped Van Buskirk and other nearby shop owners board up their broken windows.”

Wow.  That is fabulous reporting at it shows the sheer immensity of the destruction, hypocrisy and counter-productive nature of the protest.

This has being going on since the beginning.  Back owned business have been destroyed, feminist businesses and churches have been vandalized all year long!!!

Let me state up front that I highly regard the reporting the Oregonian has done on the riots this year.  I think the full extremism and damage from the protesters has been under-reported by many in media.   I see plenty of media photos of bashed windows, but see less of the signs next to the same bashed windows that says “Kill all cops”, “Kill the president”, “ACAB” and “End America”.   I see a lot of explanations of protesters call for police reform but seldom hear about their repeated calls to abolish all prisons and abolish the police which are not isolated statements but rather constant bullhorn cries and crowd chants from the protesters that go on for hours at these protests.

The post-election difference appears subtle, but long overdue if true. I hope the media is becoming more discerning on the rioters’ messages and full extent of their damage.

I am not claiming intentional media bias or bad reporting, but posing this as a question.  Share your thoughts below or on Facebook.