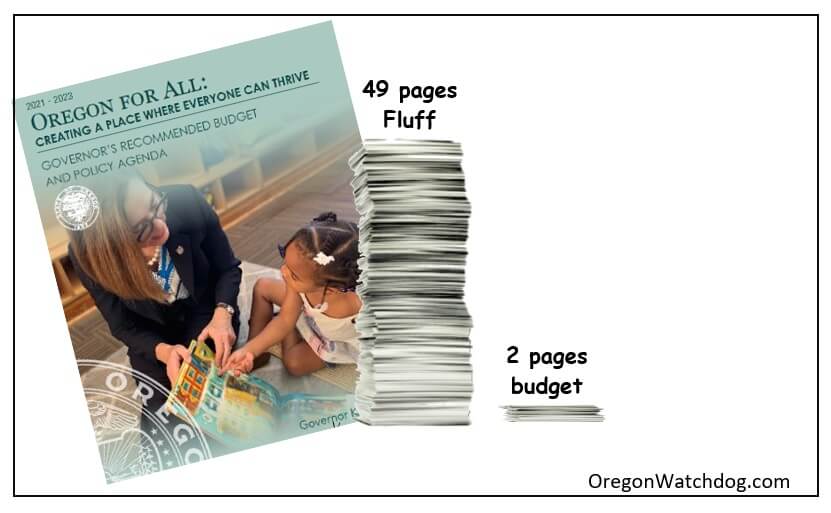 Oregon Governor Kate Brown released her budget this week, and unlike previous Governor’s, her budget document is a self-praising, epic bucket list of spending programs that lacks critical budget details.

On average, every second page is a big photo-op picture of the governor doing something.

on some pages, Gov. Brown’s photos take up nearly most of the pages. 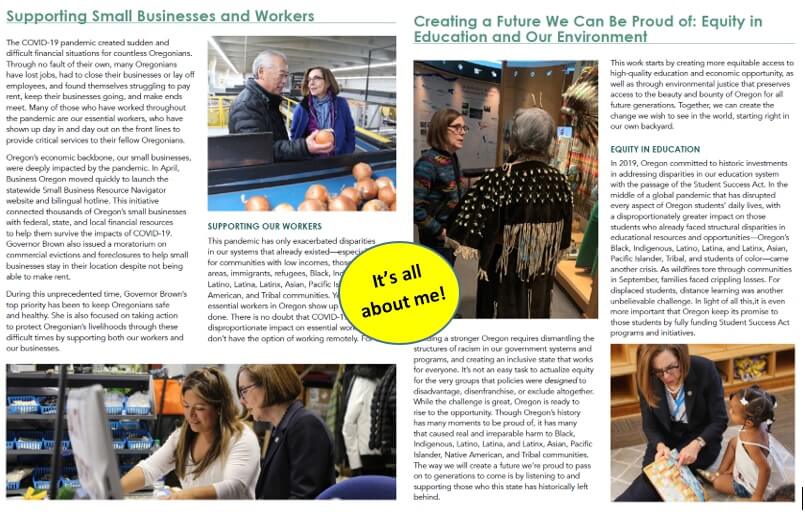 This budget appears to hide all the tax increases needed to make it balance. In previous budgets, Governor Brown simply creates a wish-list and then imposes on everyone else to figure out how to pay for it. A lot of time is spent in the document suggesting that Congress can help bail Oregon out with special funding requests.

On page 22 Brown praises herself for her helping small businesses during the pandemic, “Oregon’s economic backbone , our small business, were deeply impacted by the pandemic.  In April, Business Oregon moved quickly to launch the statewide Small Business Resource Navigator website and bilingual hotline.  This initiative connected thousands of Oregon’s small businesses with federal, state, and local financial resources to help them survive the impacts of COVID-19.”   Wow.   So during a pandemic the Governor helped create a website to showcase state help, but fails to mention the very help, the Employment Department had a catastrophic crash and stranded a quarter million jobless Oregonians for nearly 6-months.  Then the DMV system crashed, stranding tens of thousands of Oregonians who needed to get driver’s license to be able to work.  What good is a state website if it directs people to failed agencies.   What good is it after the pandemic that you recommend spending millions to make it better after the fact. We should be fixing the systemic problems that created the meltdowns in the first place (I mean it is not like we had a national embarrassing computer meltdown before — Cover Oregon????)

— By close of business day yesterday, her budget brief was not available on her Governor’s newsroom page nor on Facebook.  It was available on Twitter.  By this morning the more detailed budget was made public on her webpage, which means  the public received only the political campaign style brochure description of her budget and not the important numbers upon her announcement.   It was just enough delay to allow the Governor to put her spin on the initial reporting of the budget and hide important details.