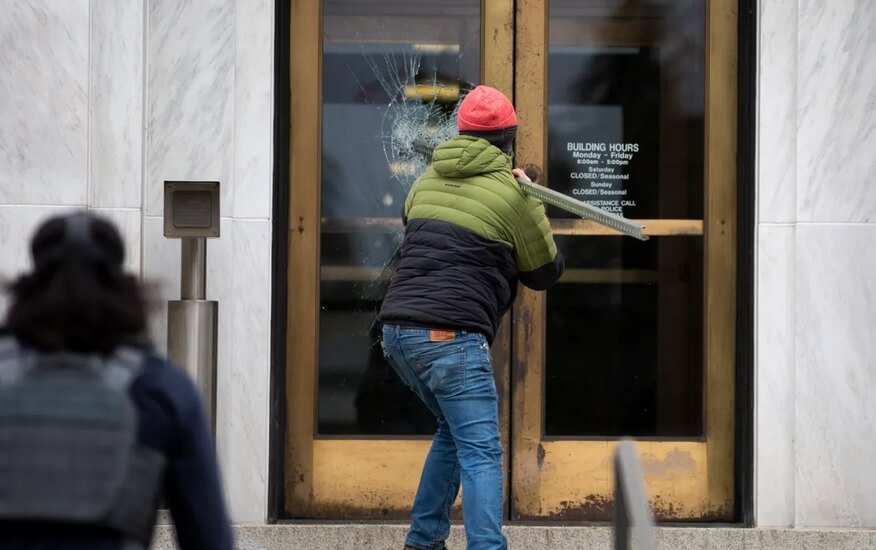 Oregon made the front page of USA Today’s website for our violence at the State Capitol.  A combination of anti-lockdown and Right leaning protesters staged a protest on the one-day Emergency Legislative Special Session being held.

As we have written over a dozen articles on the violent protesters in Portland, we also report and condemn the violence elsewhere in Oregon, this time coming out of Salem from the other political side.

Here is what happened:

– Protesters attacked two journalists.
– Police officers trying to keep the peace were hit with bear mace.
– A door was smashed in a failed attempt to enter
– A different breached door allowed people to break into the State Capitol.

Here is video of one journalist being harassed.

Such a strange sight to see people in the crowd waving thin blue line flags supporting cops, and then assaulting police afterwards. To see the crowd keep invoking the word “Constitution” with every sentence as they beat “freedom of the press” out of the Constitution by assaulting multiple journalists nearby.   There were also plenty of upside down United States flags at the event which may prove to be an indicator of the nature of the protest.

This violence is a serious disservice to those protesting the lockdown. Right now, small businesses owners across Oregon are protesting the lockdown, some are on the verge of collapse spending everything they have to raise awareness, while others are practicing civil disobedience and incurring huge fines. Their voices will be derailed and overshadowed as more accounts of violence and rioting occur at protests done in the name of “helping” them.   This also is a disservice to the peaceful protesters who likely showed up to protest the secrecy of the Special Session (one woman with a bullhorn pleaded for people to be peaceful) — their message too is overshadowed.