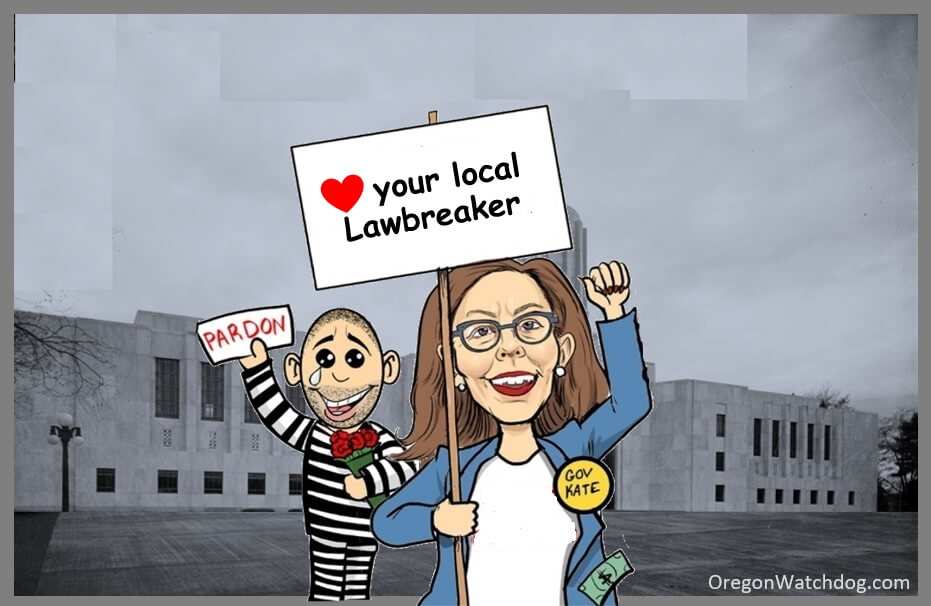 Oregon Governor Kate Brown’s December budget-policy proposals for 2021 includes an amazing array of ideas that benefit Oregon’s criminal class and criminal suspects. It is so lopsided and pro-criminal that the only way we could explain it to the public and have them believe us is to go through the budget and use Governor Brown’s own words to explain her terrible ideas.

“…the Governor’s budget will reduce our state’s reliance on incarceration.”
(page 27)

Gov. Brown wants to empty prisons at a time when Oregon saw a 40% increase in drug deaths, double-digit increases of domestic violence, and Portland saw 50% increase in vandalism, 30% increase in theft and the highest number of homicides in 27 years.  Gov. Brown is planning to close three prisons.

Gov. Brown wants schools to make it harder for students to be suspended or expelled.   Gov. Brown’s way to address the rise in school violence, bullying, gangs and sexual harassment is to let the offenders remain in the school for a longer period of time.

Gov. Brown wants to extend special privacy protections to criminals so landlords cannot decide for themselves whether a repeated woman abuser should be housed next to a victim of domestic violence.

“The Governor’s legislative agenda will include pre-trial bail reform.”
(page 28)

Gov. Brown wants to repeat the mistake New York made when they eliminated cash bail and it created a spike in crime and became so unpopular that most New Yorkers disapprove of the idea. No bail standards have resulted in criminal suspects being released early and committing the same crimes over and over again before the court date of their first offense.

“We can’t expect our criminal justice system to be fair with the scales tipped against public defenders. The Governor’s budget invests $20 million in right-sizing compensation for public defenders…”
(page 2)

As liberals push to de-fund police (Portland cut $12 million) and as Gov. Brown pushes to defund prisons, she also wants to increase funding for legal services for criminal suspects. Why can’t we properly fund all three — police,prisons and public defenders?

Keep in mind these ideas come after Gov. Kate Brown has signed into law bills that reduce criminal penalties for ID theft, property theft, auto theft and possession of hard drugs.  Gov. Brown also signed bills which resulted in 28 of 29 murderous criminals getting off of death row and being spared the death penalty.   That is right, over 90% of Oregon’s worst criminals were given a special pass from their capitol punishment under Gov. Kate Brown.