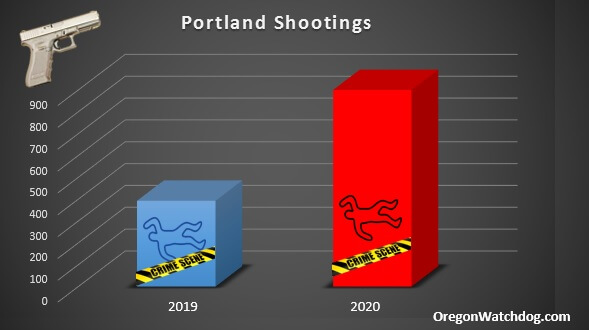 As the Portland area is experiencing a doubling of shootings, a 25 year record in homicides and a 68% increase in domestic violence, the politicians are making it harder to protect themselves in one of the most dangerous cities in America.

“While public buildings in Oregon already prohibit guns, state law has long carved out an exception for people who hold concealed handgun licenses, or CHLs. SB 554 would eliminate that exception in state buildings, eliminate a state preemption that currently stops local entities from enacting their own bans, and increase the cost of a CHL. If the bill goes into effect, anyone caught with a weapon in a prohibited public space could be found guilty of a class C felony. Public entities would be required to post notice that concealed weapons are illegal. SB 554 would also increase fees for applying for a concealed handgun license from $50 to $100, and the fee for renewing a license would increase from $50 to $75. The bill’s supporters say escalating political tensions and outbursts of violence creates a need for more serious restriction.”

“As you know the public has been locked out of the building and has no input into these floor sessions. The only access the people have to these proceedings is a video feed that was shut off at a critical time in the process. The legislative reporting system actually reported that bill had passed hours before the vote was held and showed it being “carried” by a Senator who not only opposed the bill, but was not even on the floor for the vote. The House already showed the bill being scheduled before the bill had even been voted for on the Senate floor.”

“SB 554 was brought forth by Senator Burdick (D), Portland, who has a long history of bringing gun control bills to the legislature but has no history of reducing crime or increasing public safety in our state whatsoever. We urge all Oregonians to contact their state legislators and make their voices heard.”