The Taxpayer Association of Oregon team was present at the Tuesday April 20th riot of anarchists and violent protesters following the George Floyd verdict and below are our reflections and photos.

All it took was a small crowd of less than 100 masked clad anarchist to feel bold enough to start overtaking streets at the Hatfield Federal Courthouse in downtown Portland. They walked through many other streets and around Pioneer Courthouse Square while  a smaller band of vandals within the crowd began to deface and, at times, destroy businesses along the way.

• A few vandals spray painted the front glass door of the Nines hotel while the clerks directly on the other side stood by helpless watching as their doors were vandalized. What could you do?  It was a riot.

• Various trash fires and bonfires of different sizes were started

• Four public E-scooters were used to as a makeshift barrier to block traffic. 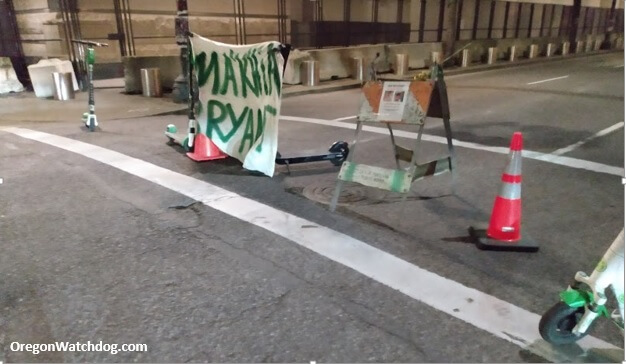 • Wherever rioters march they tend to leave behind lots of scrawling

• In retrospect, it was truly sad to for all to witness how such a small group of violent rioters seemed to have held the city hostage.

• Police used a handful of stealth bicycle cops that could quietly swoop down on a crowd without noise, without notice and very quickly.   One moment you were marching, they next you find a half dozen dark patrol officers on bike behind you.

Speaking of bicycle police, here is a video that has gone viral from that night where rioters truck a police officer.

VIDEO: An officer and protester engage in a heated confrontation. Another officer arrives on a bicycle, pushing another nearby protester. That protester then punched the first officer, and police piled on the person who threw the punch in flurry of physical confrontation. pic.twitter.com/ZpZSFClwJV

KOIN-TV captured some of the damage

•The marchers were openly hostile to media and people taking photos.  One man with a camera was surrounded and harassed which prompted him to pull out a live taser-like gun as he walked away.   One sign called for jailing the press.

• Unlike many previous Portland protests, this one included a lot of arguing by sympathetic (but argumentative) bystanders and even crowd participants who argued against destroying things. It was strange to watch a full BLM-supporting Black man chastise and call-out Caucasian anarchists for their tactics of vandalizing.

• Another yelling match occurred when an anarchist tried to block a vehicle with an innocent older lady inside from exiting the protest area. Another protester screamed “De-escalate! De-escalate!” and urged the man to let the woman through. Others barked back with “You have no right to tell us what to do!” because one thing we have learned not to do in an anarchist rally is tell another anarchist to do something. This happens in a riot amongst protesters and when it does its gets nasty.

• As noticed in the April 16th riot, there were few BLM signs and much more symbols (Three arrows, two flags) that represent other groups. 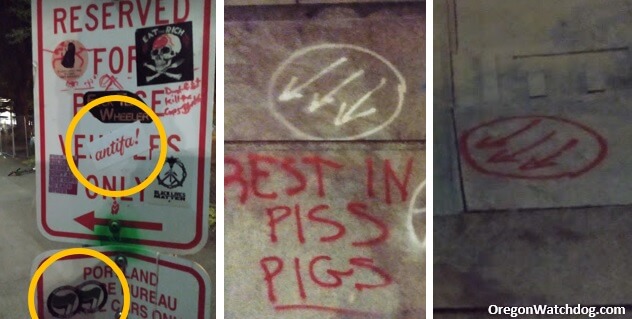