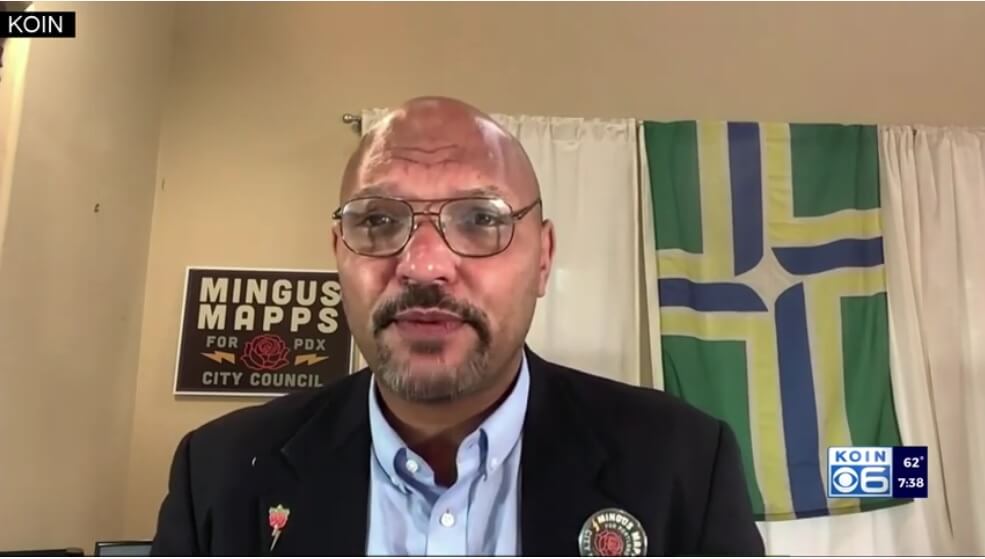 In an amazing guest opinion, Black Democrat Portland City Commissioner, Mingus Mapps gave a very stark and common sense indictment of the crime problem in Portland and the failure of Portland’s defudnd the police. He spells out below that ignoring the crime problem (which is disproportionately killing Blacks) is an act of racism itself.  Mingus is pushing against and even voting against other Portland City Commissioners who want to defund Portland police even more than the $12 million cut and 100 staff positions slashed.  What Mingus says below seems very normal to us, but to Portland liberals, very extreme.

Here is some excerpts from Mingus Mapps’ Sunday Oregonian letter:

Since January 1, I have served on the Portland City Council, a job that obliges me to tell the people of Portland the truth. Portland, we have a gun violence crisis. In the first nine months of 2021, our city has seen more than 800 shooting incidents, with more than 235 injured and more than 61 people murdered….

First, the city must acknowledge that the police bureau is understaffed. Currently, the Portland Police minimum staffing model recommends 1,100 police officers. Today, Portland employs only 793 police officers. Short staffing public safety has two predictable outcomes. Instead of doing proactive and preventative police work, officers are running from call to call for service. Relatedly, the time it takes for an officer to respond to a 911 call has gone up, increasing frustration and anxiety over the state of public safety in Portland. The bureau should immediately ramp up its recruiting of new officers to help replenish officers’ ranks. At the same time, I am pushing for adding more officers to meet and exceed the minimum staffing levels to make our city safe.

Second, police morale is at an all-time low which makes it hard to hire new officers. Being a cop is dangerous and challenging work on the best of days. Portland and regional officials have a bad habit of vilifying our police for political gain. Police are people who have dedicated their careers to serving the public. I can sympathize. As a Black man in Portland, I can attest that it is sometimes difficult to love and serve a city that does not love you back and does not have your back. We need to end the culture of blaming the police first and understand that challenges and solutions deserve complex and nuanced policymaking…

Fourth, Portland has a gang problem. Anti-police rhetoric has given way to a feeling of lawlessness, and criminals are filling the void. One of the heartening aspects of being a Black man in an overwhelmingly white town is feeling my neighbors’ well-intentioned commitment to eradicating racism. This Black man feels the love and embrace of the truth that Black Lives Matter. However, willfully ignoring the fact that gang violence is devastating Portland’s Black community is itself a form of racism. Pretending gangs do not exist devalues Black lives. While 33.6% of homicide victims were Black males last fiscal year, we make up roughly 3% of the population. At this point, it is disingenuous to deny that the Portland Police Bureau and law enforcement have a crucial role to play. I want to thank Capt. James Crooker, Acting Lt. Ken Duilio and Cmdr. Art Nakamura for volunteering to lead the new Focused Intervention Team, created to respond to and interrupt the retaliatory violence that fuels gang-related shootings. This team, along with more anti-gun violence specialty teams, will stem the current homicide rate. Officers who volunteer for these units are heroes and deserve our admiration and highest respect.Portlanders deserve public safety. We need proper staffing and funding levels for our police bureau…