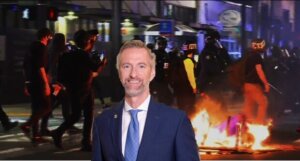 By Taxpayers Association of Oregon,

A year after disbanding the Gun Violence Reduction Team and undermining city law enforcement, Portland Mayor Ted Wheeler is backtracking. Last week he asked the city council to inject more than $5 million in new investment into the city’s police force. The move comes about a year after “defund the police” protests led the city to slash its police budget by $12 million and 1,000 staff.

Portland’s crime rate is abysmal. Murders and robberies have skyrocketed as criminals know the police force is limited, and in mid-October, Portland saw 13 shootings in under 30 hours.

The Portland Police Department’s number of officers is about 130 below its authorized level. Since August 2020, around 200 officers have left the department. In June the entire Portland Police “crowd control unit” resigned from their assignment just one day after an Oregon grand jury indicted an officer for allegedly using “unlawful” force against a protester during the violent riots that took place in the summer of 2020.

This article reports: “Wheeler’s goal, starting in fiscal year 2023, is to increase the number of officers in the department by 300 over the next three years, including 200 more officers and 100 unarmed “public safety specialists.” To do this, Wheeler is proposing $25,000 signing bonuses to the first 50 officers or specialists who sign on.”

As it is no longer politically expedient to defund the police, suddenly, Mayor Wheeler is “listening” to citizens in Portland, begging for more law enforcement. The current abysmal crime rate in Portland is due to Mayor Wheeler’s unfortunate and costly leadership.