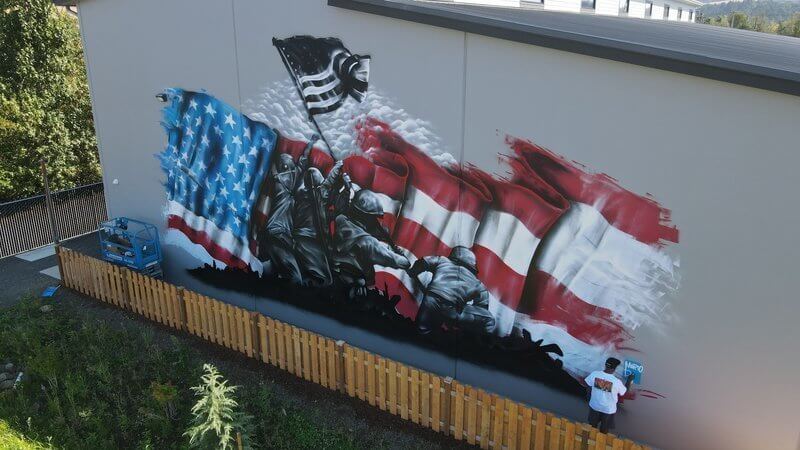 The City of Salem regulates signs to the extent that a business painting a U.S. flag that is too large on its wall can find itself in violation of city ordinances. This sounds silly but has actually happened.

Last week a family member of mine that lives in Salem shared this petition to save the mural (pictured above) of a large American flag with Joe Rosenthal’s caption of marines raising one superimposed on it. The petition claims City of Salem officials are on their case for failing to get the proper permission to engage in such free expression:

As many of you may have seen, there is a beautiful new mural on the side of the Valley Roofing building located at the intersection of Kuebler and Turner rd in South Salem. The mural depicts the iconic flag raising at Iwo Jima during the pivotal battle of WWII in the Pacific. This artwork is beautiful, tasteful, and honors our veterans both past and present. This mural is currently in danger of removal unless the city of Salem grants an exemption or makes a simple allowance. Considering the nature of the art and it being located on private property we feel this could be an easy win for everyone.

My good friend Jon Taylor owns Valley Roofing and had the mural commissioned by a local artist to honor his many friends and family members who have served. As a United States Marine and a disabled combat veteran I find it to be particularly moving and beautiful. Jon does a lot for this community both personally and through his business. He is a true credit to our fine city and a shining example of the sort of person we should all want as a neighbor and community leader. He has always donated time, money, and support to various local veteran causes and this was personally meaningful to him as a patriot and friend to local veterans. The mural seems to have caught the eye of someone at the city who cited an anonymous complaint resulting in a removal order and pending fines. We are aware of the process for “public” artworks and have been trying to find an amicable solution that satisfies the city but have not had much luck.

As a veteran and a business owner in this city I want to encourage more citizens to be like Jon and beautify Salem through both art and deeds. My hope is that a petition and maybe some emails from fellow citizens to our city council will raise the awareness and support for this problem. In times like these we can surely be using our local resources for anything better than harassing local businesses who want to change our community for the better.

Hours later, I saw this petition shared in a U.S. Marine Facebook group I’m a member of. The former Jarhead sharing the petition lives in Kentucky. So, word is getting around.

I’m generally hesitant to automatically believe such stories that paint the other side as absurd. When something really tugs at your emotions and makes some party look like a strawman villain, it’s worth taking some time to check the facts.

The Statesman Journal did a good job of this in an article you can read here. The Journal quotes city officials claiming there is no intention of having this sign removed or fining Valley Roofing. I reached out to Mayor Chuck Bennett myself to confirm, and he told me “No fines. No request for its removal.” But that’s in the present tense, implying the delay of an enforcement action.

I also took a look at the City’s ordinances. Perhaps this was, ultimately, about a fine after all, or the fee that businesses must pay for a permit to have such a sign.

The purpose of this chapter is to protect the health, safety, property, and welfare of the public; to improve the neat, clean, orderly, and attractive appearance of the community; to improve the effectiveness of signs in identifying and advertising businesses; to provide for safe construction, location, erection, and maintenance of signs; to prevent proliferation of sign clutter; to minimize adverse visual safety factors to travelers on public highways; to minimize adverse impacts on adjacent properties; and to achieve these purposes consistent with state and federal constitutional limits on the regulation of speech.

To prevent the proliferation of sign clutter? I imagine city councilors listening to the Five Man Electric Band as they voted on that language.

If there is genuine concern about having bad signs, then why not just have the code proscribe what is not allowed? Then the general erection of signs can freely proceed without the red tape of going through a permitting process. Section 900.020 provides something like this, where the following signs are prohibited:

(a) Any sign which creates a public nuisance due to statements, words, or pictures of an obscene or pornographic character.
(b) Any sign which violates ORS ch. 377.
(c) Any sign which is placed on, affixed to, or painted on a motor vehicle, vehicle, or trailer and placed on public or private property with the primary purpose of providing a sign not otherwise permitted by this chapter.
(d) Any sign located in a manner which could impede traffic on any street, alley, bikeway, or other vehicular way.
(e) Any sign constructed in such a manner or at such a location that it will obstruct access to any fire escape or other means of ingress or egress from a building. No sign structure, or part thereof, shall cover, wholly or partially, any window or doorway in a manner that will substantially limit access to the building in case of fire.
(f) Any sign constructed or maintained which, by reason of its size, location, movement, coloring, or manner of illumination may be confused with or construed as an official traffic control device or which hides any official traffic control device from view.
(g) Any sign, other than an official traffic control device, located within a vision clearance area.
(h) Any sign that employs a structure, material, illumination, size, or placement not specifically allowed under this chapter, unless the sign is a lawfully established nonconforming sign.

The vast majority of signs won’t come anywhere near these restrictions. Why would a city want to go through the labor-intensive ordeal for both the city employees and its constituents of a general sign permitting process? Look at how broad the ordinance is: “No person shall construct, erect, enlarge, alter, or relocate any sign, or install electrical parts, wiring, or illumination in or upon a sign, until all required permits have been obtained, including, but not limited to, sign permits, building permits, electrical permits, and any other permit required under federal, state, or local law.” That appears to capture more than just commercial intent. Art painted on a wall requires a sign permit.

Keep in mind that people in Salem need to pay for these permits. If the price of the permit exceeds the marginal cost of city employees processing permits, then this is a form of revenue collection. It would be a tax. So if, due to the labor shortage, a Salem business were forced to post a sign that said: “long-haired freaky people can now apply” that would be fine so long as they go through the permitting process and pay the fee.

Salem has a process for exemption by making a painting public art, but the owner objects to that because it requires giving the City a public easement on his private property. A guy decided to paint his private property and must now either pay thousands of dollars for a permit or donate it to a public art collective. That petition is worth your signature just to start a dialogue with the City of Salem on sign code reform.