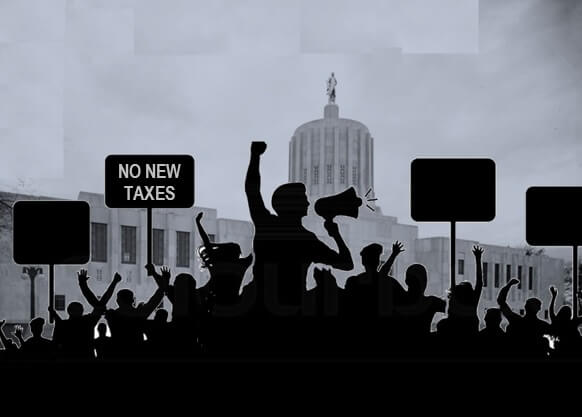 The 3% sales tax bill (HB 4079) was scheduled for a public hearing on Tuesday February 8th.  Early testimony submitted online showed an avalanche of opposition (a campaign the Taxpayers Association of Oregon help mobilize).   Then suddenly without warning the tax bill gets pulled from the hearing before the hearing starts.  This is a huge victory for taxpayers fighting against a big 3% sales tax HB 4079.   Interestingly, testimony on the bill which was previously published has now been removed from the State Legislature website.

You see, the 3% sales tax bill HB 4079 was previously hidden and not made public until right before the start of the February Legislative Session began (where the politicians arrive in the Salem State Capitol to vote on bills for a quick 35-days and then hastily leave).   Within days of the bill becoming public and the Session officially starting, a quick public hearing was scheduled giving taxpayers little time to act.     Even worse, details of the bills included dozens of blank lines where it was unknown what price levels the sales would hit on the very items it would tax (cell-phones, electronic goods, handbags, clothes, cars, boats).   The total cost of the tax and the official explanation of the bill from the State were also unknown and never released right up to the day of the hearing — meaning taxpayers were asked to testify on a tax bill where key details were still unknown.  This is a disturbing anti-democratic trend among many bills in the Legislature and it must stop.

Then there was a last minute amendment drafted leaving taxpayers wondering what the actual tax would look like.

The good news is that on the day of the public hearing the sales tax bill HB 4079 was pulled from the agenda.

Yet, because there is so much secrecy already and the fact that the tax is being rushed during a short 35-day Session deadline simply means that this 3% sales tax may re-appear at the last minute.  So please spread the word on this tax by sharing this article, Liking, Tweeting, (contact lawmakers here) so we can defeat this for good.

This is important because the 3% sales tax would have paid for free monthly checks (via debit cards) to the homeless and people under the poverty level.   The idea is often called Universal Basic Income and is being experimented and already implemented in a handful of other places in America.   Politicians are intoxicated with the idea of just writing no-strings attached checks to people as a new form of welfare.   Why bother with accountability or details when you can just dump money on people faster and easier.  This is why this 3% sales tax must be stopped.

The defeat of this sales tax is part of a 20+ year tradition of the Taxpayers Association of Oregon fighting sales taxes, property tax increases and income tax increases.  Below is our co-founder, Don McIntire, (and current Board Member Craig Flynn in right corner) celebrating a cap-on-property-taxes ballot measure victory many decades ago.  If you love winning, then please make a donation below. 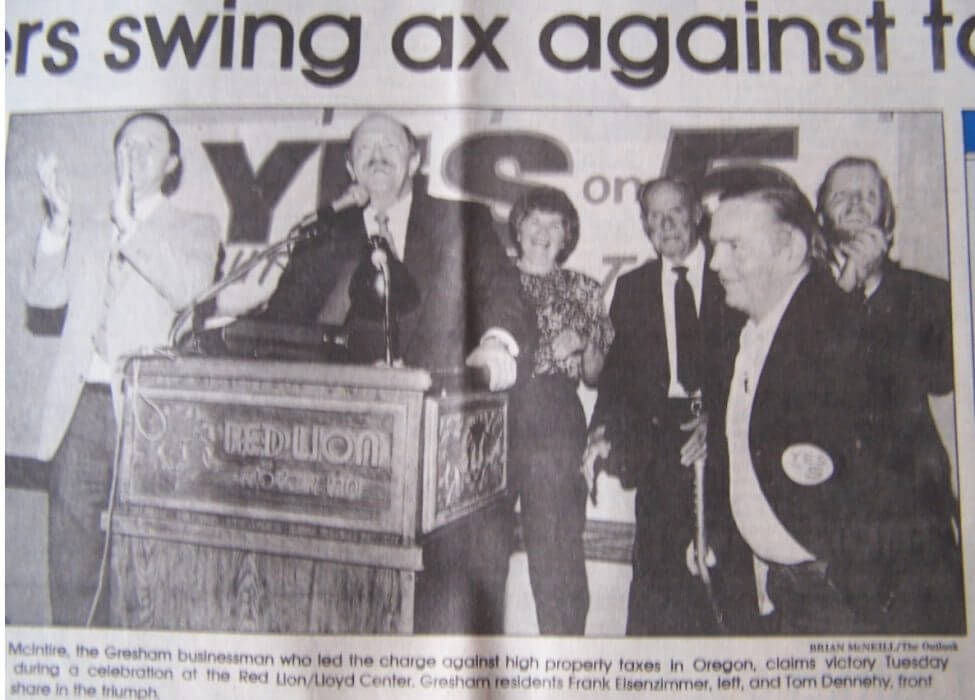