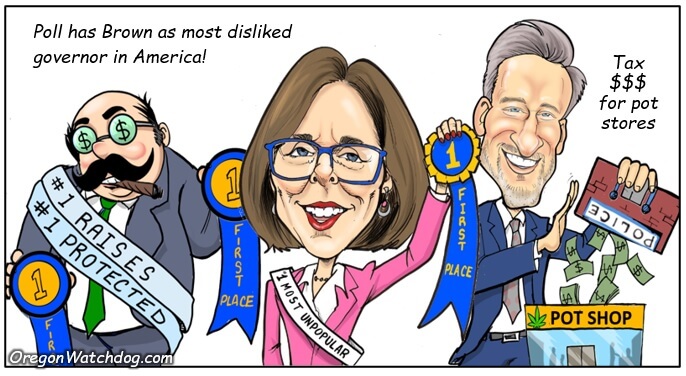 Oregon’s 21st annual Taxpayer Award winners as based by Taxpayers Association supporters mailing in their ballots.

WINNER! (37% of total vote)  Government jobs: No. 1 in biggest raises, No. 1 in fewest layoffs: The “industry” seeing the largest increases in wages during the pandemic was government. These raises were nearly three times those of average Oregon workers. The same government jobs were rated as the most protected (fewest layoffs) during the pandemic. (Oregon Employment Department 1/1/21) 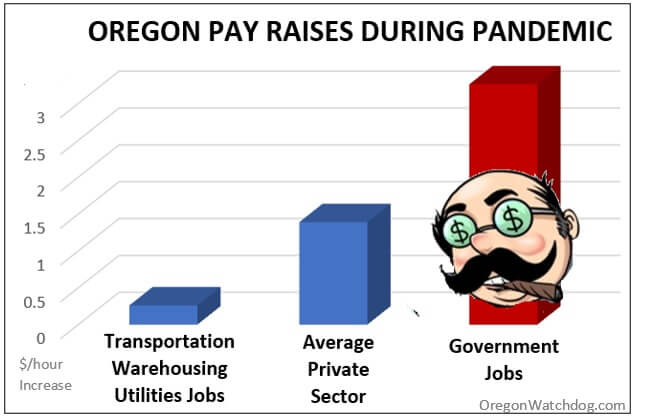 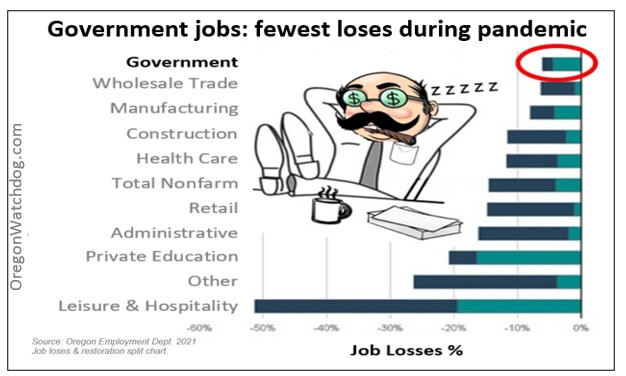 (26%) $3 million in wasted Covid gift cards: Portland gave away $3 million in CARES Act funds by handing out 8,000 debit cards loaded with $364 each, to be used for people to buy high-speed internet. But the cards contained no restrictions, and nobody required proof that the money was spent as intended. In fact, more than 800 people received two debit cards, and one person took home six gift cards worth $2,184. (KGW-TV 10 21) 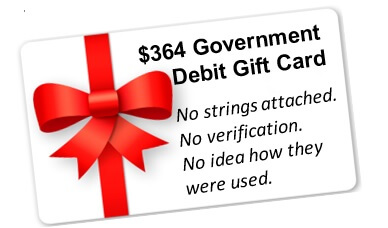 (23%)  $1.3M to pot shops: Portland city officials approved giving $1.3 million of taxpayer dollars directly to marijuana shops to boost their businesses. Some of this aid was to help stores recover from a devastating crime spree where, mainly teenagers, robbed Portland pot shops more than 100 times in just under a year. Therefore, Portland is now known for cutting police by $15 million while at the same time giving $1.5 million to pot shops to compensate them for the rise in crime caused by the police defunding and by criminals who use their product. (KOIN-TV 12/1/21, Willamette Week 3/3/21) 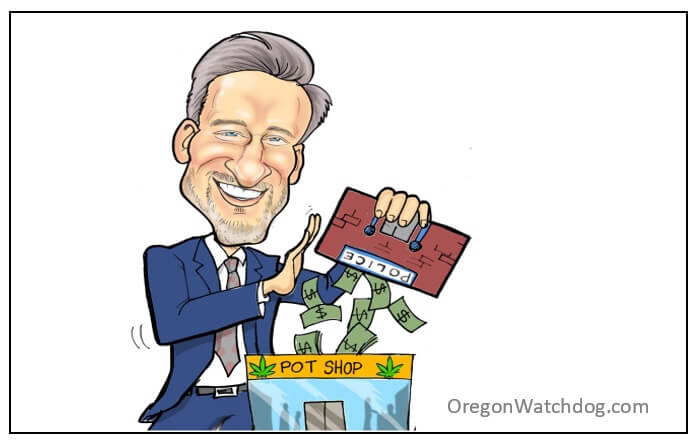 WINNER! (59%) Bacon Ban Bill: House Bill 2348 would have made it a punishable crime to serve bacon, sausage, or hot dogs in hospitals, nursing homes, or prisons.

(41%) Ban on realtor love letters: Under House Bill 2550, Oregon became the nation’s first state to prohibit prospective homebuyers from sending letters to home sellers explaining why they love their homes and their dreams of what they plan to do with them. Politicians purported that these letters fostered racism, yet they never offered a single example as proof. Furthermore, it would actually hurt minorities because their personal appeal can help them compete against big banks and wealthy house flippers, which often destroy homes and replace them with apartment units. We prefer to help minorities by giving them more rather than fewer rights and choices in life.

(33%)  Graduation standards dropped. Politicians voted for Senate Bill 744, which eliminated reading, writing, and math graduation requirements for the next three years. At the same time, Oregon’s largest school district pushed for a four-day school week in a state with already one of the nation’s shortest school years. Politicians are implementing fewer standards with fewer school days while at the same time voting for 7 percent annual raises and $1,500 pandemic bonuses for many teachers.

(12%)  75% failed to receive requested rental relief: Delays forced the Oregon Housing and Community Services to distribute only 25 percent of the targeted $134 million to tenants seeking relief by its September 2021 deadline. (OPB 9/15/21) 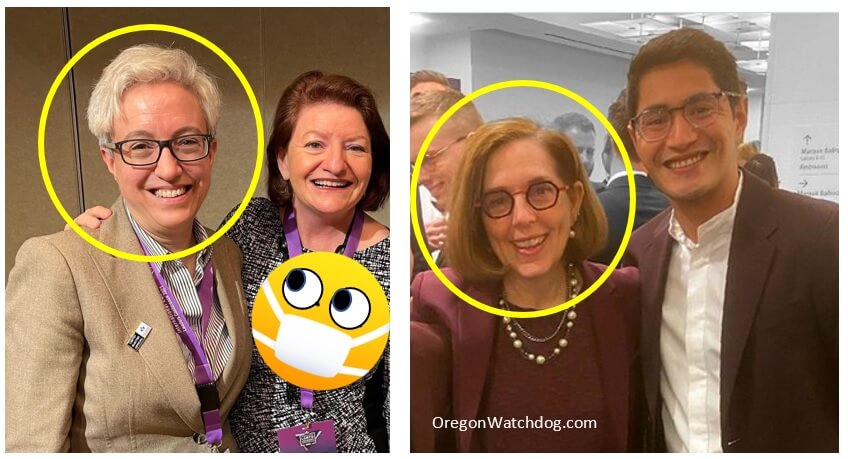 House Speaker Tina Kotek (left) and Governor Kate Brown were caught maskless at a big political fundraiser where donations were as high as $100,000. Brown’s publicists attempted damage control by claiming she went maskless only for pictures and eating. Yet newly released photos proved this as a lie.

WINNER (47%) Oregon Governor Kate Brown: A national poll ranked Brown as the most unpopular governor in all 50 states. In April, Oregon was the only state forbidding fans from attending basketball games—until a local NBA star (Damian Lillard) tweeted a complaint. Then, magically, the science changed, and officials reversed the arena ban within 48 hours. The same thing happened in November, when Oregon was among only a few states with an outdoor mask rule—until football fans complained ahead of the popular Civil War game. Then, magically, the science changed, and officials reversed the outdoor mask rule 100 hours before game day. While her office staff drafted permanent rules for indoor masks, she was caught at a crowded Washington, D.C., political fundraiser without a mask. She also jumped ahead of older seniors when getting the vaccine despite making a public promise not to do so. Governor Brown also held secret meetings with prison inmates as she used her pardon powers to grant early releases. She did not consult with either local law enforcement officers (who were intimately familiar with the cases and the criminals) or the victims’ families.

(16%) Portland Mayor Ted Wheeler: Wheeler defunded police by $15 million and cut 100 positions, which resulted in 2021 breaking all-time homicide records. Nearly half of the victims were minorities. In the name of fighting racism, Wheeler ordered police to stop enforcing minor traffic violations. This resulted in strange displays of traffic lawlessness such as gangs shutting down an entire freeway at night to do drag racing. During the summer, Wheeler announced that police would not intervene when anarchist rioters confronted counter-protesters. Dueling sides battled it out on our public streets with bear mace, smoke bombs, and public beatings while others shot explosives near a gasoline station. The stark violence in Portland that day brought national condemnation, which forced Wheeler to reverse the disastrous no-intervention policy. Wheeler also launched a failed “Choose Love” sign campaign to discourage anarchists from rioting. 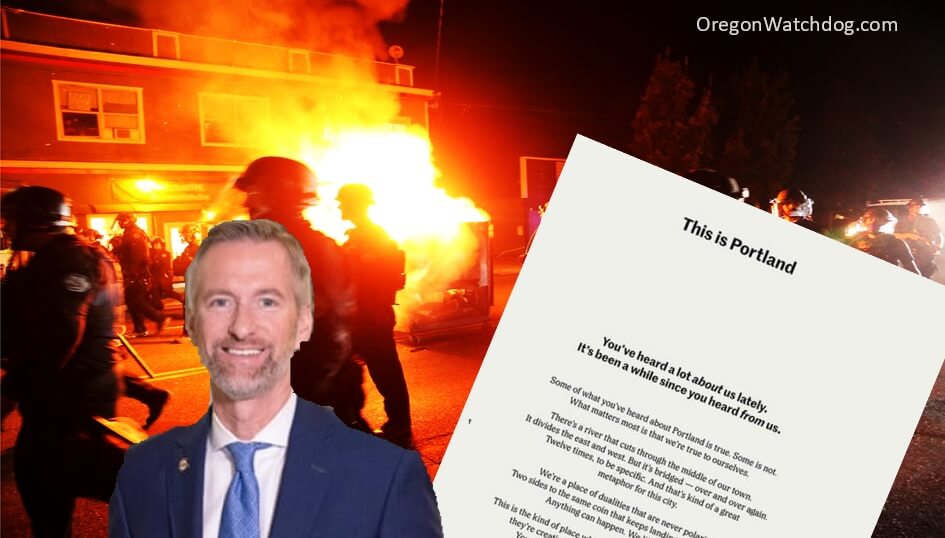 (14%) Oregon State House Speaker Tina Kotek: Kotek engaged in the greatest act of political betrayal seen in the Oregon Legislature in the last 50 years. As House Speaker, she made a grand public gesture by striking a deal, promising the opposition minority party (Republican lawmakers) an equal voice on the important redistricting panel (which draws political boundaries) in exchange for them expediting her bills. After she got all her bills passed, she broke the deal, blocked minority votes on the panel, and then ramrodded a redistricting plan so one-sided that even some of her own (Democrat) members voted against it and was rebuked by the Washington Post. Kotek remained unapologetic when she was caught maskless at a crowded indoor political fundraiser.

(11%) Oregon State Senator Ginny Burdick: Burdick authored the $50 million Small Business Tax, Senate Bill 389, which retroactively taxes small businesses by 17 percent and coincidentally hits only family-owned businesses (Big C-corporations were conveniently exempted). On the same day she supported raising taxes on small business by $50 million, she voted to give a whopping $50 million tax break to Oregon’s wealthiest. Soon after, Burdick decided to retire and accept a political appointment to a $146,000-a-year government job.

(10%) U.S. Representative Earl Blumenauer: After Jeff Bezos launched a tourist rocket into space, Blumenauer proposed a S.P.A.C.E. Tax (Securing Protections Against Carbon Emissions) to tax ordinary people who want to travel into space. For decades, US astronauts were forced to ride Russian rockets to board the international space station. Thanks to private entrepreneurs, both US astronauts and tourists can access space while saving taxpayer dollars. Unfortunately, Blumenauer wants to capitalize on this successful private model by taxing it to death and hampering America’s space race. Blumenauer also wants to raise gas taxes by 25 cents a gallon to force people to stop driving cars while giving away $1,500 rebates to people who buy electric bikes. 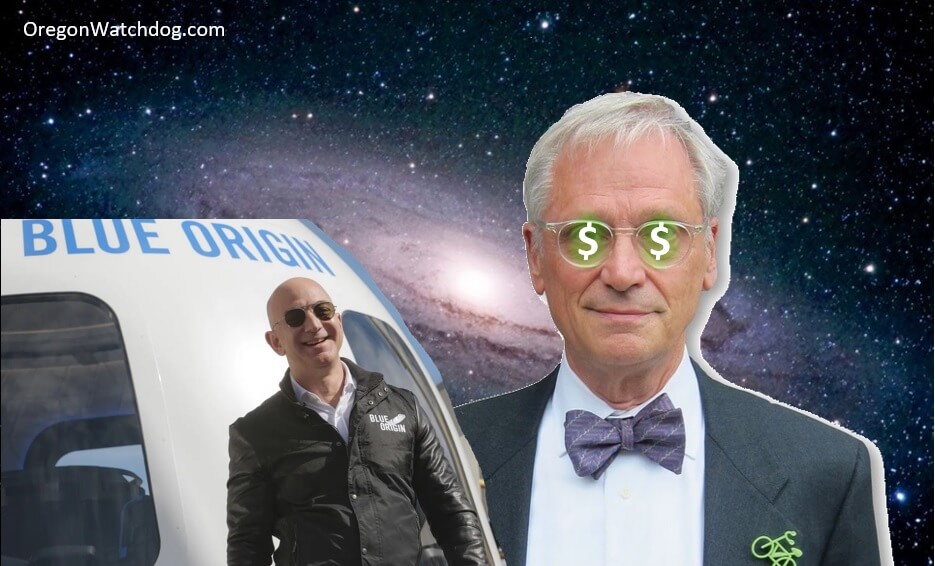