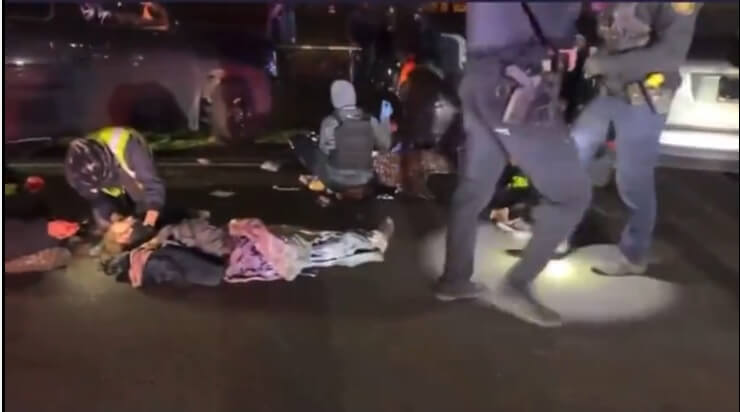 The Multnomah County District Attorney has filed murder charges for the suspect accused of shooting five people at Normandale Park in Northeast Portland on Saturday night.  The protest turned deadly when Benjamin Jeffrey Smith allegedly confronted participants and began shooting people in the crowd who were also armed.   One person has died.

Portland Police are detailing that critical evidence has been swept from the crime scene and are asking people to return it.   Andy Ngo reports that even Antifa activist (who has been arrested multiple times) is pleading with “comrades” to return any stolen evidence and said “You are hurting us if you took something and do not return it.”

This shooting is a tragedy and the victims deserve justice, but justice cannot be served until all the evidence is in.   The taking of evidence during a controversial protest crime scene is becoming a recurring problem among Portland police.

Here is the latest on the Police Report:

A preliminary investigation into the February 19, 2022 shooting near the intersection of Northeast 55th Avenue and Northeast Hassalo Street indicates this incident started with a confrontation between an armed homeowner and armed protesters.

The scene was extremely chaotic, and a number of witnesses were uncooperative with responding officers. Most people on scene left without talking to police. Detectives believe a large number of people either witnessed what happened, or recorded the incident as it unfolded. This is a very complicated incident, and investigators are trying to put this puzzle together without having all the pieces. Detectives ask that anyone with information or video please contact Detective Scott Broughton at [email protected] (503) 823-3774 or Detective Rico Beniga at [email protected] or 503-823-0457. The case number is 22-47502.

On February 19, 2022, at 8:01 p.m., officers from the North Precinct responded to a shooting call near the intersection of Northeast 55th Avenue and Northeast Hassalo Street. When officers arrived they located a female victim who was deceased. Additional shooting victims, two men and three women, were transported to area hospitals and their status is unknown at this time.

The identity of the victim, as well as cause and manner of death will be determined by the Oregon State Medical Examiner. Additional information will be released at the direction of investigators.