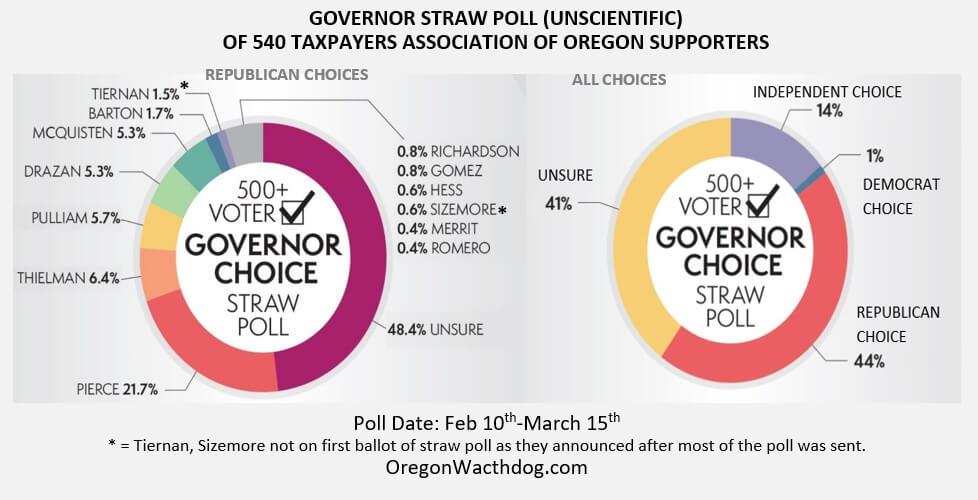 The Taxpayers Association of Oregon mailed to their supporters (2/10-3/15) a straw poll (unscientific) ballot asking them for their choice for Oregon governor along with a question on their reason why they supported them.

• Respondents represented all political party affiliations (Independent, Non-affiliated, Libertarian, Democrat, Republican) and is not a reflection of how primary voters would decide.
• The ballot was nonpartisan as it listed all the Oregon governor candidates.
• Over 540 votes were received.

• Massive spread: With 23 total candidates in the race, the most in Oregon history, the poll reflects how spread out the votes have become over those 23 candidates.
• Similar results to DHM Poll results: Independent candidate, Betsy Johnson, scored 14% which was very similar to the DHM poll of 11% last February.
• Similar results to Cyngal Poll results:  A January Cyngal poll (by Pierce campaign), had Bud Pierce at 19.9% compared to our Straw Poll at 21%. McQuisten scored both polls exactly at 5.3% while Drazan and Pulliam were both within 2% between the polls.  Both polls showed unsure at over 40%.
• Massive undecided: The high number of undecided shows that many voters have yet to be reached or make a decision.  This race is wide open.

• On the Republican side, Dr. Bud Pierce scored the highest, as he has high name ID and support from his previous run for Governor and his $600,000+ campaign spending in last year alone.
• Some candidates are still conservatively holding on to most of their funds raised. Example: At the time of poll, Christine Drazan was holding onto one million in reserves. Bridget Barton was holding a near-half million in reserves.  Expect to see their numbers rise very soon.
• Candidate and School Superintendent Marc Thielman benefited from increased media attention during the straw poll period as he made media headlines over the fight to restore local control over mask mandates for schools as the debate reached its highest media saturation point.
• This was an unscientific straw poll that captured Taxpayers Association of Oregon supporters in a moment in time while providing them a way to express their candidate choice and also the reasons behind it.
• Candidates Bob Tiernan and Bill Sizemore announced close to filing deadline and after the the straw poll was mailed.  An additional smaller mailing was sent that included them on the ballot.
• Early. Early. Early.  This is an early poll, where exposure to candidates is limited.  Expect wide swings in the next few weeks.

Here is the reasons Taxpayers Association of Oregon supporters gave to their choice in candidate:

– “Not bought by lobbyists; strong fighter for us”

– “She seems to have best chance.  Is saying the right things”

– “She emails about topics I care about, doesn’t ask for money”

– “Business background; not an attorney”

– “He will work with all sides”

– “She is solid on 2nd amendment, votes for people not just a robot for Democrats.”

– “Track record and loyalty to Oregonians”

– “Would be tough. Stand-up to administration”

– “If Salem won’t listen to rural Oregon, we will send rural to Salem with Kerry”

– “Experience as mayor; gets things done”

– “We’ve heard more about him”

– “No a political background; thinks on his feet”

– “He stood up to Kate Brown’s mask mandates”

– “Heard many good reports and I don’t know other candidates”

– “He would give people more control, less government”

– “He can get positive things done. He will reign in bureaucracy”

– “I need more info about candidates”

– “Looking for the most conservative”

– “Haven’t heard of most of the candidates”

•  If you would like to vote in future straw polls, then please consider becoming a Taxpayers Association of Oregon supporter.

DISCLAIMER:  This was a common straw poll and represents an unscientific method to gauge support among a select audience.  The open-nature of the poll (all candidates listed, recipients representing diverse political parties) means it has less reflection on the May primary, which is closed to non-party voters, and more a reflection on how voters feel outside the primary and allowing these voters to register their opinion on who they like and list the reasons why.   This straw poll allows everyone to participate, even though it is limited in its application.

* Additional notes:  In addition to Taxpayers Association of Oregon supporters, additional mailings were sent to prospective voters based on their support for lower taxes and limited government.  Ballots were mailed 2/10/22 when Bob Tiernan and Bill Sizemore had yet to make their late announcement which was a few weeks before filing deadline.  As a result, their names were not on the ballots, although the write-in section section was offered and respondents did utilize it in this poll.  Additionally, the mailing went out just before candidate Nick Kristof was declared disqualified by the Oregon Supreme Court.  Therefore his name was on the first straw poll ballot when voters received it.  A good faith effort to send out a smaller second mailing of ballots of 1,700 was sent out that included the updated candidates of Tiernan and Sizemore and also removed the disqualified candidate of Kristof.   This allowed us to include Tiernan and Sizemore in this small, limited capacity.  Candidates were recognized by their presence on Ballotpedia and their official PAC filing with the Secretary of State.   As stated before, straw polls are limited in application and unscientific in nature, but provide an important way for voters to participate and express themselves early in the process and a chance for candidates to listen and respond.