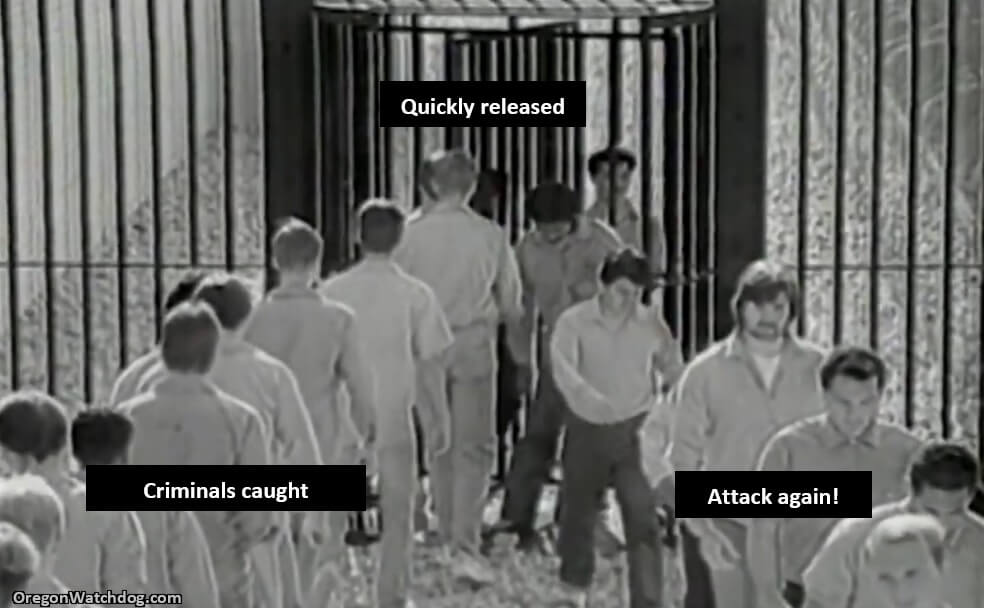 A man arrested on suspicion of sexually accosting a 12-year-old girl was released from the Multnomah County Detention Center after four hours, and a week later, he broke into a Gresham home and threatened his father’s family at knifepoint.

Portland police arrested Bill Glenn Fomonyuy, 20, on March 28 after he allegedly followed a 12-year-old girl near Bloomington Park in Southeast Portland onto a porch, exposed himself to her, and asked her to have sex with him—but he was released on his own recognizance only four hours later.

Earlier in the day, he had prowled the neighborhood where surveillance video showed him ring a doorbell at 5:22 a.m., look around, and then wander down the street, looking into cars.

The girl was shaken by his vulgar language, indecent exposure, and attempts to block her from knocking on the neighbor’s door for help, according to The Oregonian.

He was arrested on suspicion of felony coercion, felony luring a minor, and public indecency, a misdemeanor. But because he had no criminal record, he qualified for release from the Multnomah County Detention Center four hours and 15 minutes later.

The early release of the man who failed to show up for his arraignment the following afternoon irked the girl’s family and neighbors, including one man who followed the suspect to a dead-end street and called police.

Only a week later, on the night of April 6, Fomonyuy allegedly kicked in the door of his father’s house, ripping off the deadbolt, and once inside, grabbed a knife, drank wine, and threatened to kill members of his stepfamily. His stepsiblings ranged in age from 7 to 21. The family escaped out the back door and fled to safety.

His father, Emmaneul Wirdzensai, said his son had arrived in the United States only two months ago from Cameroon, where he lived with his mother. He had left his father’s home about three weeks ago after beating up his stepsister and others in the family.
Police arrested Fomonyuy on suspicion of first-degree felony burglary, four felony counts of unlawful use of a weapon and three counts of domestic violence-related menacing.

A judge this time ordered Fomonyuy to be held until his next court date. A prosecutor asked him to refrain from setting bail until after a preventive detention hearing.