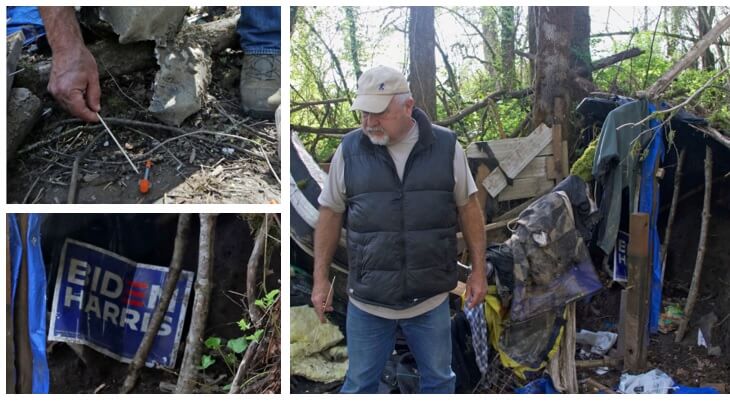 By Jim Bunn for Congress

While putting up campaign signs on Lancaster Drive, former Congressman Jim Bunn noticed a used syringe by the sidewalk (photo above).  Bunn said “It’s sad our kids have to be exposed to drug needles on an almost daily basis”. “The area had a homeless camp nearby and reminded me of another homeless camp near my family’s farm”.

Bunn helped pick up trash and drug paraphernalia. “This was an area I played in as a kid and my brother’s grandkids play in today “.

The Biden/Harris campaign sign, used as part of the shelter said a lot.

Bunn commented that the homeless crisis has many causes, from mental health to land use and inflation but drug addiction is probably one of the main factors. “When passing out needles to addicts is called TREATMENT, our government has a problem. When uncontrolled government spending fuels inflation, we have a problem. Many people simply cannot afford high rents and excessive government spending only increases the problem”.

As a member of Congress, Bunn was a co-sponsor of the Balanced Budget Amendment which passed the House but fell one vote short in the Senate. Bunn says it’s time to try again. “Deficit spending is a bad idea. Defunding Police is another bad idea “. Bunn says “We have enough laws on the books, we have enough prison beds for violent felons, the last thing we need to do is defund the police”.

Bunn is running for Oregon’s new 6th congressional district and is a former Congressman and retired Deputy Sheriff.