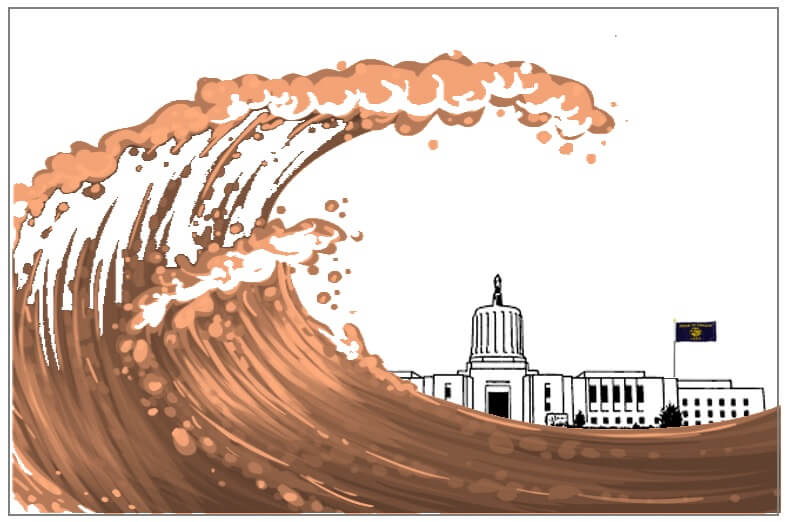 By Ryan Knoll
This article provided by Oregon Transformation Newsletter.

West Coast Democrats and Republicans, alike, are holding their collective breath to see if the 2022 midterm elections will deliver a series of triumphs by the GOP. In key races in places like Los Angeles and Portland, voters are fed up and electoral dynamics are shaping up to be a challenge for Democrats.

Portland, the largest and most populous city in Oregon has suffered under one-party rule for years and the results speak for themselves. The Rose City has a touch of the blues. It has experienced the largest percentage increase in homicides of any city in the West, and its residents suffer a litany of blue-state woes including high crime, inflation and sky-high unemployment. But Oregon has a chance to heal itself with a Republican governor, and that possibility is more likely than ever this cycle as Democrats fight among themselves.

Republicans up and down the West Coast can win because the facts on the ground are impossible to ignore. Cities are in a state of decline and decay. Our neighborhoods and streets look like urban campgrounds for the homeless, and quality of life – by almost any metric – continues to plummet.

In Portland, residents are burdened with the fourth-highest average price for gas, the ninth-highest median home price, and the fourth-highest cost of living in the nation. All is not well in Oregon. In fact, according to a recent poll by DHM research that was conducted in February, 73% of Oregon voters believe the state is heading in the wrong direction, with homelessness and government leadership ranking as their top concerns.

In a normal year, none of this would matter – Portland and Los Angeles are true blue and that’s just how it is. However, the electoral dynamics this time around present an interesting scenario. In Oregon, popular former state senator Betsy Johnson is running as an independent (despite being a well-funded “dependent” of her political benefactors, Nike CEO Phil Knight and Columbia Sportswear CEO Tim Boyle), which will draw votes away from the Democratic nominee. In fact, history has shown that, in a three-way race, the outside party can win with as little as 38% of the vote.

In Los Angeles, the leading candidate for mayor is Rick Caruso, a Democrat-in-name only (he was a registered Republican until a month ago). Caruso is running on a platform of cutting crime and ending homelessness that he borrowed chapter and verse from LA’s neighbor to the south, San Diego, which has elected a Republican mayor 13 out of the last 15 times. Current LA mayor Eric Garcetti is mired in a nasty harassment scandal centered on one of his top aides that is holding up his confirmation to be Ambassador to India. Also, three current or former Los Angeles City Council members have been indicted in the last three years and erstwhile GOP seats in nearby Orange County are poised to flip back from blue to red.

A red wave in 2022 is more than just fanciful speculation. The aforementioned DHM survey of Oregon voters asked this generic question: If the election for governor was between a Democratic and Republican candidate only, who would you vote for? Voters expressed their support for a Republican candidate by a staggering 47% to 29% margin.

While the political stars are aligning locally, they are doing so under the national cloud of incompetence and scandal that is the Biden administration, which makes West Coast voters even more likely to demand change. With an economy that looks like a replay of the Carter presidency, and with a president who looks like he wants to replay the Cold War, the only way Democrats can win is if Republicans do nothing.

Consider what we just witnessed in New Jersey where Republicans won eight seats in the legislature and came within a whisper of winning the governor’s mansion. Six of those seats are in the assembly while one of the two includes Stephen Sweeney’s former seat in the state senate. Sweeney was senate president for 12 years until he lost to Republican Ed Durr, a truck driver who spent $2,200 on his campaign.

There is an accountability wave coming. In both California and in Oregon, the GOP can and must play to win. The alternative is the forfeiture of power and permanent exile for Republicans too proud or unwilling to fight.