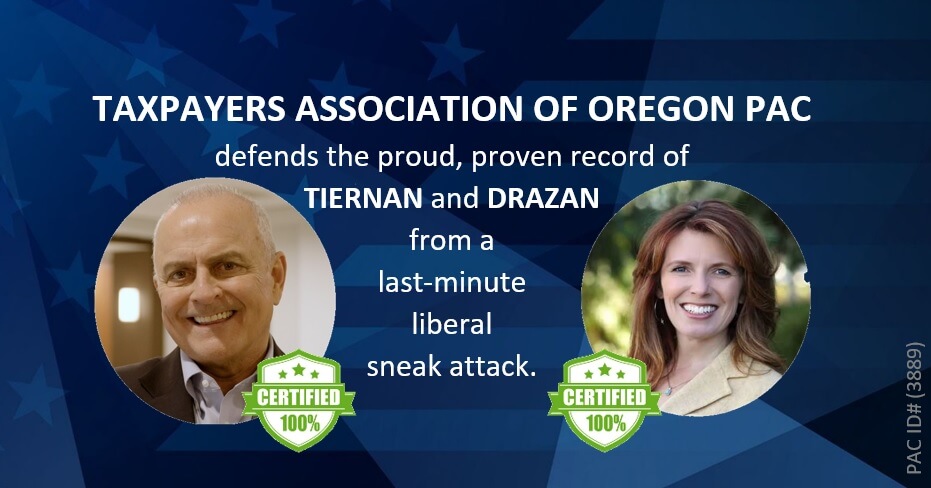 In the final hours of the May Primary an anonymous liberal sneak attack text campaign is underway to attack both candidates, Bob Tiernan and Christine Drazan.   This has the fingerprints of a liberal dirty-campaign trick to try to interfere with the results of the Republican Primary because voter turn out is so low (80% haven’t voted).  Also, there is panic among the liberals because their leading candidate, Tina Kotek, has unperformed and trailed in fundraising behind the other candidates (in the worst year possible for their Party) so it makes sense to launch an anonymous effort to sow division in the rival Primary against the two leading fundraising and polling candidates.

For instance, The Bob Tiernan campaign is reporting an anonymous texting campaign is falsely claiming that Tiernan is connected to an unnamed, undescribed sales tax.   No citation is given.  Dirty tricks!  We have viewed the suspicious texts.  Taxpayers Association of Oregon PAC founder, Jason Williams, served next to Tiernan on the House floor for multiple Sessions in the 1990’s and recalls that Tiernan was one of the strongest voices in the entire Legislature for lower taxes and protecting liberty.  Williams recalls, “He took brave stands on issues that were ahead of their time.  Tiernan’s record should be celebrated, and deserves better than anonymous attacks”.

We are also getting word that similar anonymous texts may have also hit the Christine Drazan campaign.  For us, Christine Drazan’s record is solid.  The Taxpayers Association for Oregon awarded her (and then-Senator Herman Baertschiger) our highest award, Thomas Jefferson Award, in 2020 for their work to defeat the Carbon Tax (72-cent gas tax).  Even the successful defeat of the Carbon Tax became a bizarre tool to unfairly attack Drazan’s record during the campaign.  We will defend the record and honor of our Award Winners from anonymous 11th hour sneak attacks from unnamed sources.

These texts are also why we are seeing a rise in calls into our office about it, so we must address it.  By the way, we are not the only conservative group that is sending out a statement this very weekend to correct Drazan’s record from false misrepresentations.

For the record, the Taxpayers Association of Oregon PAC has not endorsed any Governor candidates in the May Primary.

We ask that you spread the word to alert other voters about anonymous based attacks.  These came by texts, others may come by robo-phones.

P.S. We are reporting this article in real-time and will update it as we get more information.  Be free to pass along additional information.