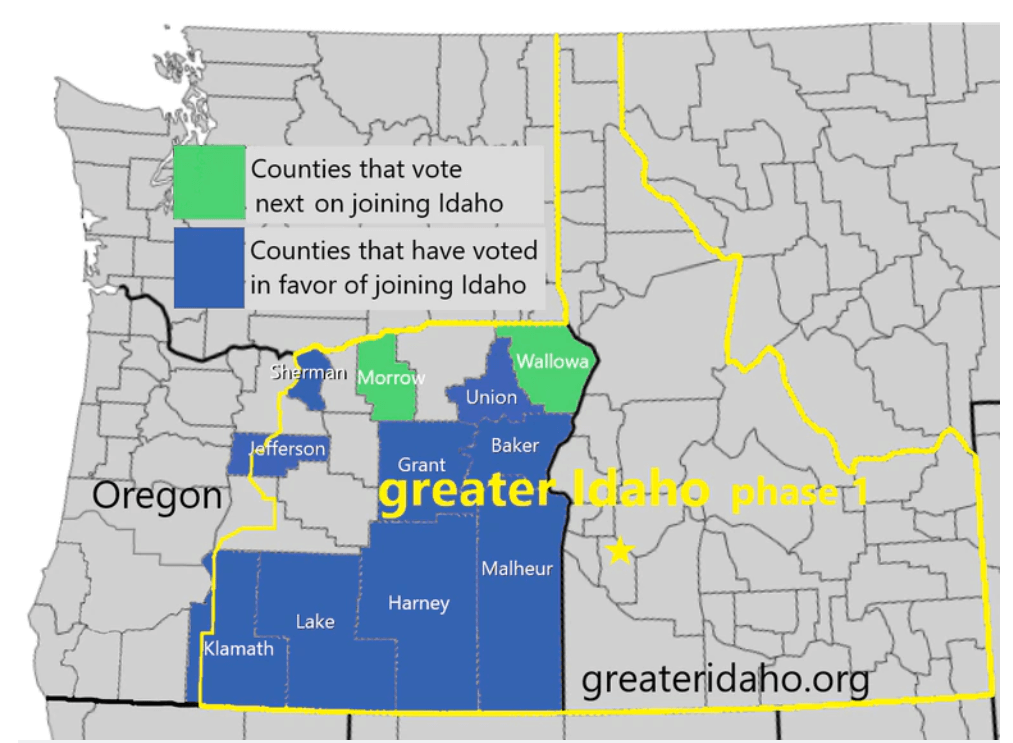 In the question of succession, how counties vote doesn’t decide whether they get to join another state. Counties are not sovereign in the way states and the national government share sovereignty under our federal constitution. Regardless of how any Oregon county plebiscites might go, three legislatures would have to vote on it: the Oregon legislature, the Idaho legislature, and the U.S. Congress.

Only a Republican-controlled legislature could possibly think of approving Idaho’s annexation of its territory. Whether or not we will ever see one of those again, remains uncertain. Were Democrats to support such a measure, it would certainly make the remaining population of Oregon an even more progressive political culture. That might be tempting to some on the far left in the Portland metro area, but they’ve already enjoyed a fairly progressive policy environment. Why give up the opportunity to impose that worldview on more people than themselves?

Any scenario where Republicans actually controlled the Oregon House and Senate might be slow to approve a succession of the base of the Republican Party’s voters. This lost territory would be critical to Republican control. So a Republican legislator must ask: should I vote to guarantee my loss of power?

How likely would the Idaho legislature even want to annex these refugee counties? From the perspective of Idaho Republicans, they might see this new territory threatening to dilute their existing power.

From the perspective of national politics, Idaho would gain a new congressional seat, but it would be Oregon’s Second Congressional District, a safe Republican seat anyway. Though that would not impact the control of the U.S. House of Representatives, it would give Idaho an additional Electoral College vote. No Democrat in Congress would ever vote for that. Maybe they’d bargain it away in exchange for adding Puerto Rico as the 51st state, but national Republicans might not see that as a worthy trade, because Puerto Rico’s two senators would give Democrats an additional two Electoral College votes beyond its single Congressional District.

Many proverbial stars would have to align to make Greater Idaho a reality. It’s fun to think about, but these county votes are likely to amount to little more than protest votes.