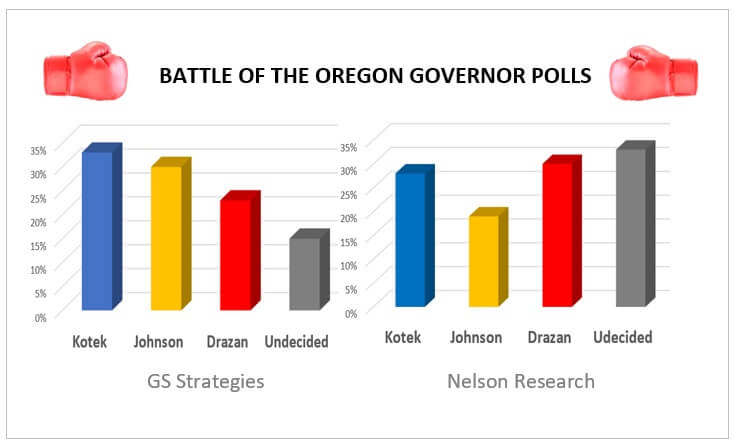 Two polls have come out this summer, each with different results.

KOIN-TV 6 (7/6/22) reports, “The survey, conducted by GS Strategy Group, shows that undecided voters dropped from 41% percent before the May primary election, to 20% right after that vote, and 15% now. The telephone survey was conducted June 23 to 29 among 600 likely November voters. Respondents were randomly selected from the voter file and the survey has a margin of error of plus or minus 4 points. The June poll — asking the standard, “if the election were held today” question — shows Kotek leading with 33% of respondents; Johnson right behind at 30%, and Drazan trailing with 23%. But the plus-or-minus-4-points makes the spread difficult to predict. If accurate, that would put the gap between Kotek and Johnson within the poll’s margin of error.The survey also included some questions seemingly designed to draw specific responses.”

Please comment on your take on the differences, takeaways and opinions.