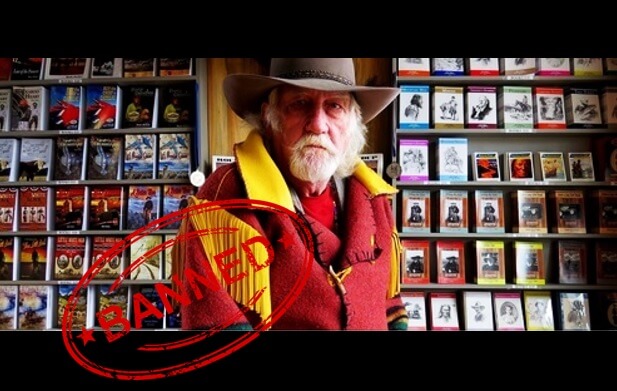 Rick Steber – Makers is my dear friend. He’s one of the GREATEST western writers of all time. He was a frequent guest on my radio show for many years and we’ve spent some good time together.

When I read this story I was stunned! Rick Steber is the REAL DEAL cowboy author and real deal cowboy. I hope you’ll read his post below and follow through with calls/emails/letters to those he listed. NO BOOKS should be banned. Especially great western stories.

I have almost all of Rick’s books in my library, my favorite being “Red, White, Black” the story of the three finalists in the 1911 Pendleton Round Up Rodeo. It’s riveting and absolutely true. Another that I love is “Little White Man” the story of a white missionary who came to the Oregon prairies to “save the red man” only to learn he wasn’t just saving them, but himself. It’s an amazing story and true!

He writes fiction too, but all of it is based on real people in the West. Please help Rick out! 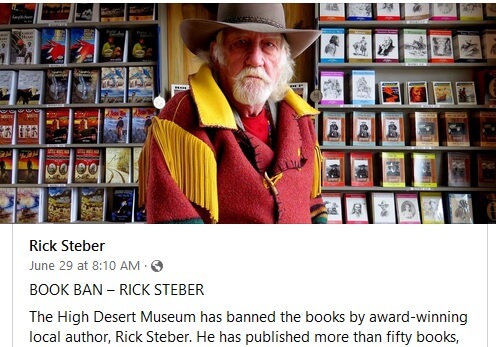 BOOK BAN – RICK STEBER FACEBOOK POST
The High Desert Museum has banned the books by award-winning local author, Rick Steber. He has published more than fifty books, with sales exceeding two million copies and he has a well-earned national reputation in the literary world. When Don Kerr started the museum, one of the first items he added were the books of Rick Steber, saying his work was “an accurate depiction of contemporary and historical life on the High Desert.”
Alison Luce, Retail Lead at the museum’s Silver Sage Trading Store, announced the heavy-handed censorship by the museum, writing in an email, “It has been determined that Rick Steber’s books are no longer aligned with the forward direction of the Museum.” When asked to explain what she intended by, “aligned with the forward direction of the Museum,” she declined further comment.
Executive Director Dana Whitelaw, explained that the High Desert Museum is working to promote events like Burning Man and authors who advocate for “social justice.” She stated, “Rather than relating a historical perspective, the High Desert Museum will now focus on global climate and contemporary diversity. I’m not saying we are banning Rick Steber books, what I’m trying to say is that we will no longer be carrying them in our gift shop.” When asked if she had ever read a Rick Steber book, the executive director replied, “I don’t need to.”
The High Desert Museum has assets of 27 million dollars and an annual budget of nearly six million dollars. The bulk of these funds are derived from state and federal government grants and donations. According to Rick Steber, “I’ve been a staunch supporter of the High Desert Museum, and have been asked to give talks there on numerous occasions, but I’m dead-set against this ‘new focus’ of the current staff and board of directors. I will boycott the museum until the museum returns to the mission statement of its founder, Don Kerr. “Our mission is to inspire and foster wise stewardship of the region’s cultural and natural resources. The more people know about this region, and the origins of the region’s past, the better equipped they will be to decide the course of its future.”
To voice your concern about the draconian censorship imposed by the High Desert Museum please contact:
Dana Whitelaw at 541-382-4754 ext.326
Email – [email protected]
Nelson Mathews, Board Chairman at (503) 241-0151 x227
Email – [email protected]
Share
Related posts: