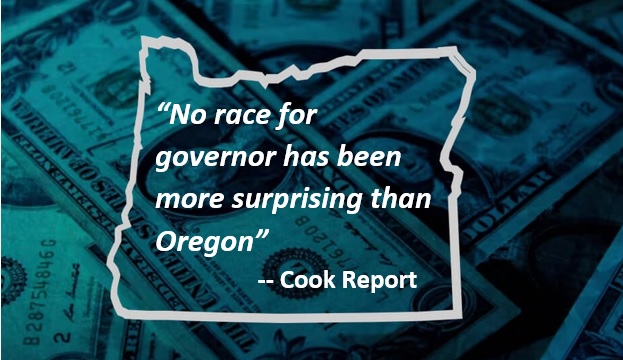 One of the most watched independent national forecasters, The Cook Report, just downgraded Democrat chances of a Kotek win by moving their prediction from “leaning Democratic” to a toss-up.

The Cook Report says, “With less than two months until Election Day, the 2022 gubernatorial map has seen some surprising shifts since the outset of the cycle. Republicans had initially started targeting the Rust Belt, hoping to flip control in perpetual swing states like Michigan and Pennsylvania. But, saddled with weak and cash-poor candidates, those contests have moved down the priority list as new opportunities have emerged.  No race for governor has been more surprising than Oregon, which we last shifted into the competitive column at the end of July, moving it from Likely to Lean Democrat. Now, we are changing our race rating once again into the Toss Up column.Thanks to the presence of a well-funded independent candidate, private and public polling has shown the GOP nominee, former state House Minority Leader Christine Drazan, neck and neck with Democratic former House Speaker Tina Kotek.”

Washington Examiner says, “The blue dam could be starting to break in the Beaver State, with the nonpartisan Cook Political Report shifting its rating in the governor’s race from “lean Democrat” to “toss up.”Republican contender Christine Drazan has been running strong in the three-way race between former state House Speaker Tina Kotek and former state Sen. Betsy Johnson in polling. Despite Oregon being a traditionally deep-blue state, Democratic Gov. Kate Brown has been unpopular, according to a local outlet, seemingly giving the GOP a rare opening.”