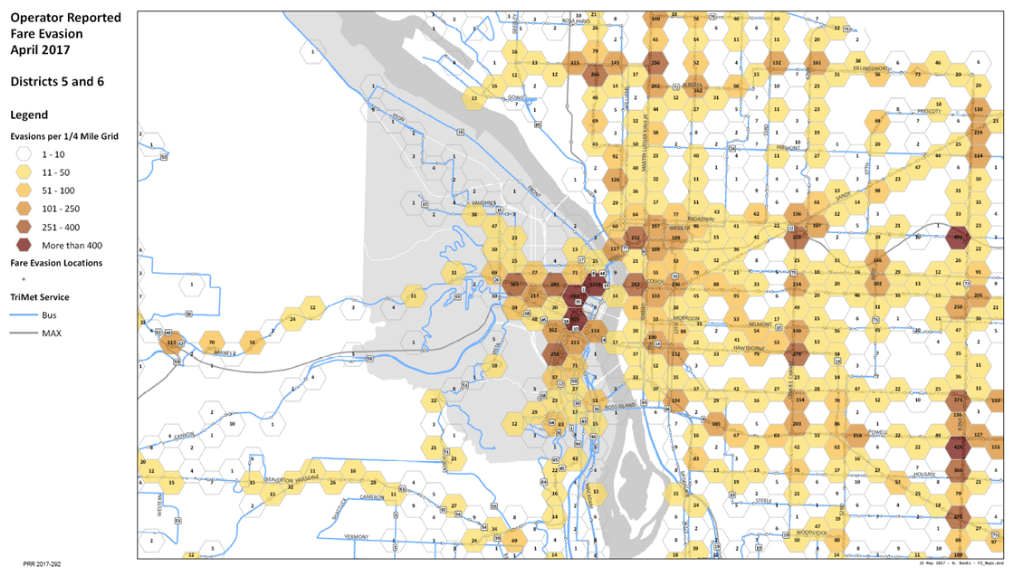 Endogeneity is a modeling problem in econometrics where at least one of a researcher’s explanatory variables is correlated with the model’s error term. A common cause of endogeneity is the omission of another important independent variable.

A classic case of this problem occurred two years ago when Dr. Brian C. Renauer of Portland State University’s Criminal Justice Policy Research Institute released a study showing disparate “racial/ethnic disparities in TriMet fare enforcement outcomes.” If one were to actually read his paper, the reader would see Renauer carefully made clear in his literature review that this does not necessarily imply a biased approach to fare inceptions on TriMet’s part, because there was an important missing variable:

That did not prevent groups like OPAL from pressuring TriMet to effectively shut down fare inspecting until Oregon’s largest transit authority could find more “equitable” outcomes. It was easy for TriMet to succumb to such a campaign, given how little of their funding comes from passenger ticket sales. The solution ended up being to sell lawmakers on a combination of decriminalizing fare evasion, lower fines, and funding for reduced rate fares.

This week Renauer released a follow-up study designed to control for some of the endogeneity in his prior paper’s results. Using both a simple baseline method and a logistic regression, he found no evidence of systemic enforcement bias against minorities. So it turns out the only real bias here was omitted variable bias. True cases of racial bias in law enforcement do exist and ought to be corrected, but policy changes should be based on valid empirical evidence, not indeterminate results like Renauer’s 2016 research. This whole episode has been costly for TriMet, its riders, and most of all, the workers whose wages now get taxed at a higher rate to fund the new reduced fare program.