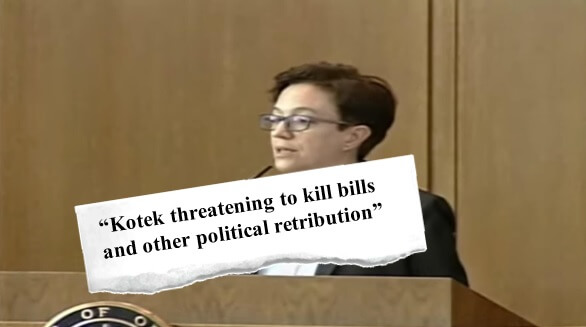 OPB reports that this week a Legislative hearing began over (then) House Speaker Tina Kotek’s use of threats and abuse of power to silence political enemies and even members of her own political party caucus members.

OPB states, “In an hours-long hearing, two former state representatives and a sitting state senator shared personal accounts of Kotek threatening to kill bills and other political retribution as she sought to pass priority legislation as speaker. Former state Rep. Diego Hernandez, who lodged the hostile workplace complaint that prompted the hearing, said he slipped into depression after a heated conversation in which he said Kotek threatened to end his political career if he would not vote as she wanted. “I felt crushed,” Hernandez said. “I felt traumatized.”

Kotek did not appear at the hearing.

The Oregonian noted her abuse of power in their endorsement this week. 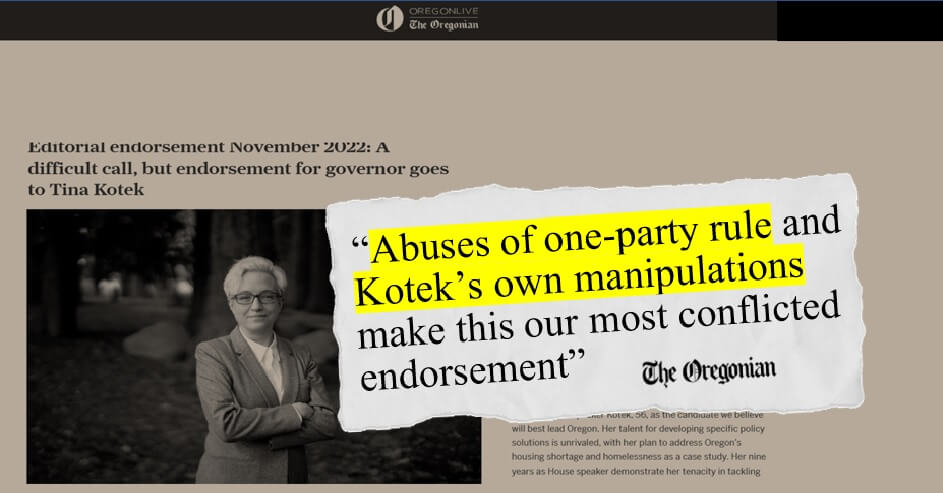 Furthermore OPB states, “Hernandez’s complaint dates back to May 2019, when Kotek was attempting to pass a bill curbing public pension benefits to achieve savings. Hernandez and other Democrats were uncomfortable with the measure, Senate Bill 1049, which was opposed by unions. Some in the party, including Hernandez, refused to support it.“I was living under constant fear,” Hernandez said on Wednesday. “She used the thing I cared about the most, my community, to try and force me to do something I didn’t want to do.”…Hernandez’s complaint also suggested an eyewitness: Republican State Sen. Dallas Heard, R- Myrtle Creek, who has told OPB that he witnessed Kotek and Hernandez having a heated discussion. Heard also said that Kotek even threatened to kill one of his bills over Hernandez’s vote, which she has acknowledged and apologized for soon after.”

The Washington Post reports, “Hernandez told the committee that Kotek had angrily threatened his bill to provide drivers licenses to Oregonians who arrived in the U.S. illegally unless he supported another bill to cut retirement benefits for the state’s public employees — a measure that eventually passed by the narrowest margin.“I think out of all the messed up things the speaker said and did, the one that crossed the line is when she threatened to ruin my political career, that she’s going to make sure I lose my next election. She said this in rage,” Hernandez said. He said he suffers from post-traumatic stress disorder.“I’m still recovering from PTSD and other traumas from my legislative experience with Tina,” Hernandez said. “To say her bullying and racism destroyed my soul is an understatement.”

In similar news,  Democrat State Lawmaker Marty Wilde made this revelation earlier this year about Kotek’s abuse of power “Over time, we even stopped debating the issues, as caucuses became a forum for leadership to give orders to ensure the Democratic agenda prevailed over the Republicans’ agenda, regardless of whether it was in the public interest.…worst of all, leadership positions were filled based on success in fundraising, not merit or expertise. The House Democratic leaders even stopped telling the caucus members about their discussions. In effect, the content and direction of legislation for all of Oregon was decided by a group of 10 or fewer people picked by their ability to raise money, in secret.” 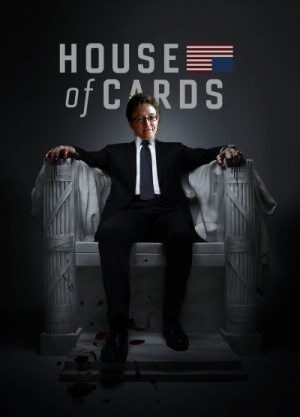