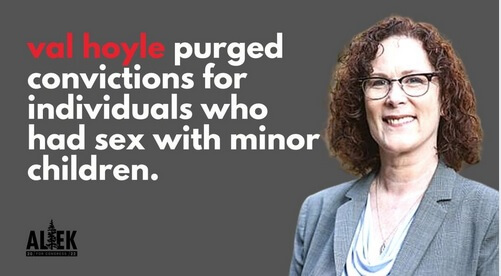 The Alek Skarlatos campaign issued this statement on Val Hoyle on purging convictions for sex offenders:

While serving in the legislature, my opponent, Val Hoyle, purged convictions for individuals who had sex with minor children.
Specifically, in 2013, Hoyle voted for the highly controversial H.B. 3327. As The Associated Press reports:
“Some young offenders convicted of having sex with underage partners would be able to request the crime be removed from their records under a bill narrowly passed by the Oregon House on Wednesday. … Opponents say people convicted of sex crimes often reoffend and should not be able to have their records expunged. “Individuals who commit sex offenses this isn’t their first time, and it won’t be their last,” said Crook County District Attorney Daina Vitolins, who opposes the bill on behalf of the Oregon District Attorneys Association. To say an act is consensual when it involves a person who is too young to give consent is indefensible and minimizes the law, Vitolins said.” (Bill would give break to some young sex offenders, The Associated Press, 05/09/13)
Share
Related posts: