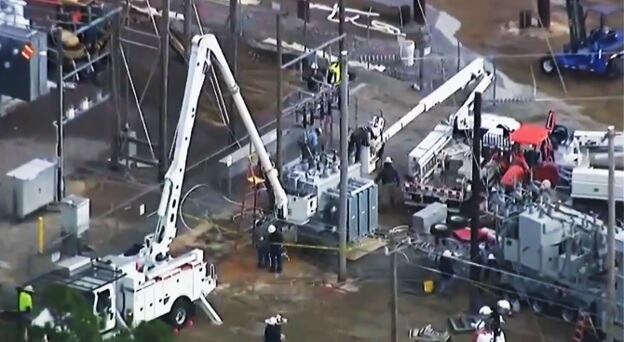 In North Carolina two different electrical substations were sabotaged leaving 35,000 without power for many days in the winter.   This is similar to what is happening in Oregon.

News Nation reports Federal Law Enforcement officials saying “Power companies in Oregon and Washington have reported physical attacks on substations using hand tools, arson, firearms and metal chains possibly in response to an online call for attacks on critical infrastructure. … In recent attacks, criminal actors bypassed security by cutting the fence links, lighting nearby fires, shooting equipment from a distance or throwing objects over the fence and onto equipment.” 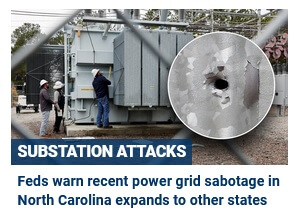 Back in February the Justice Department convicted three men (Texas, Ohio, Wisconsin) of plotting to attack power grids in America.

“Three men pleaded guilty today to crimes related to a scheme to attack power grids in the United States in furtherance of white supremacist ideology.According to court documents, Christopher Brenner Cook, 20, of Columbus, Ohio; Jonathan Allen Frost, 24, of West Lafayette, Indiana, and of Katy, Texas; and Jackson Matthew Sawall, 22, of Oshkosh, Wisconsin, each pleaded guilty to one count of conspiring to provide material support to terrorists. The charge and plea agreements indicate that the defendants knew and intended that the material support they conspired to provide would be used to prepare for and carry out the federal offense of destroying energy facilities.”

News & Observer noted previous attacks over the years “…San Jose, California, nearly a decade ago. At least two people armed with rifles opened fire on Pacific Gas & Electric’s Metcalf substation shortly after midnight on April 16, 2013. A fusillade of more than 100 rounds disabled 17 transformers. The company was able to reroute power and contain the outage but had to spend $15 million on repairs. There have been other attacks on power substations since, including a series by an Arkansas man later that year. In 2016, someone fired a rifle into a substation in southern Utah, cutting off electricity to 13,000 customers for a day.”