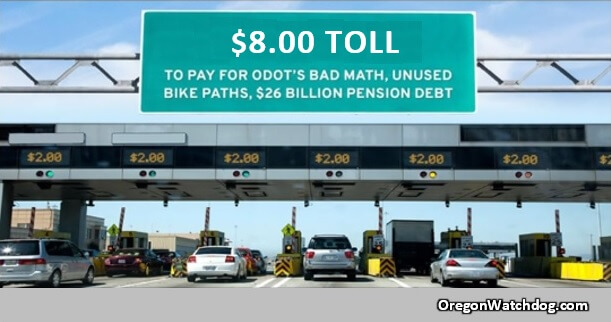 Oregon Department of Transportation has many financial problems.

• ODOT was part of a team that spent $200 million dollars studying a Columbia River Crossing bridge that was never built.

• ODOT’s Highway 20 project was riddled with mistakes and was over $225 million over-budget (from $140 million original cost to $365 million final cost).

• ODOT doesn’t spend money on bike paths as needed, but has it in state law that 1% of all road dollars must be spent on bike paths, regardless, if it is needed or actually used.

Here is the real reason why ODOT needs a tolling project.

It is all about the Oregon Public Employee Retirement System (PERS) that is $22 to $26 billion in debt.   The New York Times profiled it as among the most expensive government pensions systems in America.   Being $26 billion in debt means it is devouring most agency budgets and leaving them with less money to spend on actually doing their jobs.

Health care: The $26 billion government pension debt devoured so much of the Oregon health care budget that advocates pushed and passed a $330 million tax on hospitals and people’s health care plans to pay for dedicated stash of money to fund health care above their normal budget levels.  This is also why Oregon was rated as the nation’s worst hospital capacity state in 2019 because hospitals had to fire staff in order to pay for the tax.

Public safety: The $26 billion government pension debt has devoured so much of the Public Safety budget that Governor Brown simply released 1,000 criminals early and pledged to close three prisons as a way to save costs.

Natural Resource Budget: The $26 billion government pension debt has devoured the natural resource budget so much that the politicians decided to underfund their budget by as much as $136 million.  This happened the year before the historic 2020 wildfires.

The Oregon Department of Transportation.

They are the next government agency to need a half-billion tax cash  infusion.   They got a gas tax hike, car sales tax, transit payroll tax and bike tax in 2017, but that is not enough.   They need even more money.  This is where tolling comes in.

Oregon politicians, to be led by Governor elect Tina Kotek, will finalize plans for tolling Interstate 5 and interstate 205 from anywhere from $2.00 to $8.00.   This will help ODOT pay off their portion of the $26 billion government pension debt.  It will soak taxpayers like yourself.

The politicians say they need the up-to-$8.00 toll to help reduce traffic.   Rising traffic is the natural cause of what happens when you do not build new extensive roads.   Instead of roads, ODOT has been spending money on trains (not enough people use), on bike paths, on insane over-spending ($200 million bridge study, $220 million HWY 20 over-budget) and on their portion of the $26 billion government pension debt.

The up-to-$8.00 toll represents everything wrong with a bureaucratic, dysfunctional and often money-wasting machine called ODOT.

(Toll cost: The projected toll cost for drivers is expected to be anywhere from $2.00 to $8.00.   ODOT says $2.20 could likely be the highest mark for peak travel time, which is when most would actually be using it, the rate is expected to be higher if you drive a van or commercial truck.  Additionally, ODOT says that some commuters who travel routes covering two toll-points daily will see a total of $8.00 costs as they will pay a toll 4x every work day to go to work and back.  Lastly, years ago when tolling was suggested for the Columbia River Bridge rebuild is was estimated that $8.00 would a possible tolling cost.  It is hard to see that since the bridge is being planned to be replaced and roughly 10 years later that inflation has made this cost shrink. The publci won’t fully know what the toll will be until we get there, by that time it will be too late).