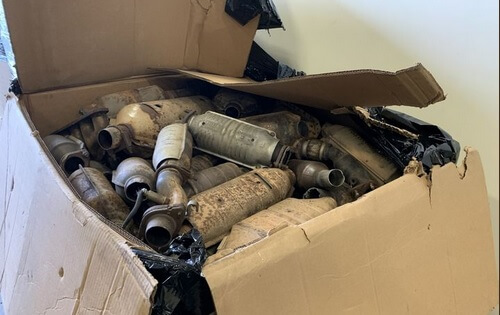 Medford Police detail that they have arrested a Bend man for whom they connect to the theft of 28,000 stolen catalytic converters.   Here is the interesting fact.  Oregon is only among around three states with tough catalytic converter resale laws, yet Oregon is a top state for catalytic converter theft.  Why?   It turns out that Oregon has such uncontrolled crime where criminals steal here but then sell in other states.

Here is more on the arrest:

Medford Police report, “On December 22, 2022, Medford Police Detectives arrested 25-year-old Cedrus Jahson King at a residence in Bend following a multi-year investigation into a catalytic converter theft ring. The investigation, which culminated last week with the search of three locations including a residence and warehouse in Medford and residence in Bend, led to the seizure of over 6,700 pounds of catalytic converters, thousands of dollars in cash, jewelry, and associated vehicles. Detectives identified King, of Medford, as a purchaser of catalytic converters in June 2021. As the investigation continued, King was determined to be at the top of an organized crime ring associated with the theft of catalytic converters. King is believed to have trafficked over 28,000 stolen catalytic converters since October 2021 with an estimated street value of approximately $7 million.King has been charged with the following crimes: Racketeering, Aggravated Theft in the 1stDegree, Theft in the 1st Degree, Unlawful Transport of Metal Property, and Unlawfully Purchasing and Receiving Metal Property. King was lodged at the Jackson County Jail and the case is now with the Jackson County District Attorney’s Office. Catalytic converters are being stolen at increasingly higher rates due to their valuable metals, such as rhodium, platinum and palladium. Recent disruptions in supply chains have made them more difficult to source and, in turn, more prone to theft. Vehicle owners can install an anti-theft device over the catalytic converter to prevent it from being stolen or etch a license plate number or VIN onto the part to deter thieves.”