Straw Poll: No to internet “Kill-switch”
By Taxpayer Association of Oregon

A straw poll of over 250 Oregon taxpayer activists voters were asked whether they support or oppose giving the President an Internet “stop-switch” to protect against cyber attacks.  The great majority say “no”. The issue is important as CBS News reports there is a new 2011 push to give President Obama  the power of a “Kill-Switch” or “Stop-Switch” for the internet as a safety measure.  The latest major action on the bill was on 12-15-10 at which time it was placed on the Senate Legislative Calendar under General Orders. 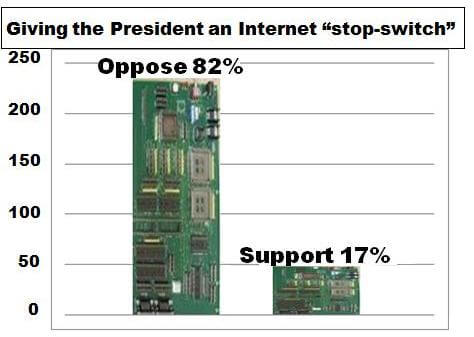 The bill would allow the President to declare a national emergency and implement emergency-response and restoration plans. Implementation costs are estimated at $1.5 billion over a four year period and the bill would impose infrastructure cost mandates on intergovernmental and private-sector owners and operators of information systems estimated at approximately $100 annually. Owners and operators would have to comply with new security standards and procedures.

Full summary of the bill