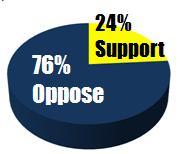 By the Taxpayer Association of Oregon

A straw poll of over 300 Oregon taxpayer activists were asked whether they support or oppose the creation of a Lieutenant Governor position in Oregon. The majority of those polled say no.  (230 oppose and only 72 support).

The last legislative vote in Oregon considering a Lieutenant Governor position was in 2007. At that time, Rep. Dennis Richardson saw the position as “an ambassador” for the state to encourage economic development. Now, with the new 2011 legislative session, it appears Representative Richardson is once again going to present it for consideration to “encourage economic trade and business development for the state.”

45 states presently have a Lieutenant Governor position to act as a state ambassador and is empowered when the governor is out of that state.