From the Oregon House Republicans 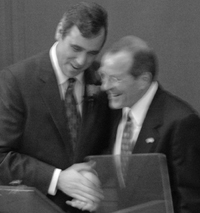 $20 Million: Pay raises to appease the unions– who were upset about the political appointees’ pay raises

30: Number of House Democrats who opposed HB 2550, the plan to hire a legislative auditor to review the performance of state agencies and increase fiscal responsibility in state government.

It’s no surprise a majority of Oregonians polled rated the Legislature’s performance as “unfavorable.” (Governor, Lawmakers Get Their Lumps in New Poll, The Oregonian, 12/8/07)