Yesterday’s 2011-13 Revenue Forecast marks the ninth reduction in revenue out of the previous twelve Quarterly Forecasts.

Oregon’s September 2011 Quarterly Revenue Forecast was released yesterday and Oregon’s expected revenue for the 2011-13 biennium has been reduced by $193 million. 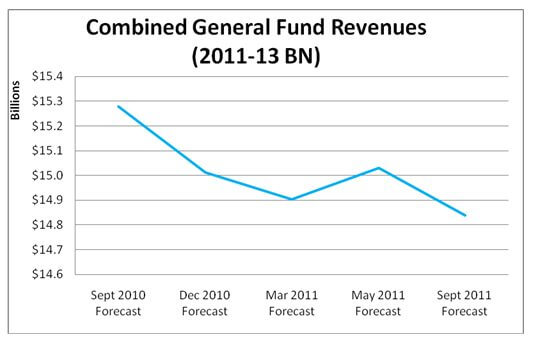 A $193 million decrease in anticipated revenue for 2011-13 is certainly unfortunate, but for me, not surprising news.  I have repeatedly stated that Oregon remains immersed in a Great Recession.  With yesterday’s Forecast, clearly, Oregon predicted recovery has not materialized.  Notwithstanding my rather pessimistic view of Oregon’s economy, the Office of the State Economist reassures us that they continue to expect a “weak economic recovery.”

Only three months ago, when the May 2011 Forecast was released, the State Economist, having actual data for 23 of the 24 months of the 2009-11 budget, reduced the 2009-11 forecast by $49 million from the February 2011 Forecast. Yet, at the same time he reduced the 2009-11 forecast, the State Economist projected the revenue for the 2011-13 biennium (which was to begin on July 1, 2011), was even more positive than the Forecast given only three months earlier.

Regarding the accuracy of the increased 2011-13 revenue forecast, I stated the following in the May 12, 2011 newsletter:

Notwithstanding the reduction of $1.2 billion in forecast revenue in the past two years and $49 million in just the past three months, yesterday’s revenue forecast for the near future (2011-13 biennium), is much more optimistic. For 2011-13, we are told we can anticipate a strong economic recovery that will reverse the downward trend.

Yesterday’s forecast predicts a $127 million increase in tax revenue over what was forecast only three months ago. In sum, the 2009-11 forecast has decreased to $12.38 billion, while the 2011-13 forecast has increased to $13.90 billion. Thus, although the State has lost $1.2 billion of expected revenue in the past two years, it expects to gain new revenues of $1.5 billion in the next two years. Happy days…? Don’t bet the farm just yet. (Click here.)

Oregon’s ability to compete with more business-friendly states is steadily declining. [Oregon’s place in the 50-state “business friendly” rankings has dropped from a dismal 38th to an appalling 43rd .]

In my opinion, precious little has been accomplished this session that will result in greater prosperity, self-reliance and success for unemployed Oregonians across the state. Consider the power and potential for transforming Oregon’s economy if a committed coalition of Oregon’s legislators were to unite in a common cause, without consideration of party or politics, and join forces to remove existing barriers to economic growth and prosperity.

We were elected by promising to do something to create JOBS, JOBS, JOBS. Yet, what have we done to help make Oregon a more “Jobs-Friendly” state?

One strategy is to promote the prosperity and expansion of Oregon’s small businesses—those already here and operating. We members of Oregon’s legislature can help develop and implement a new plan for prosperity based on non-partisan principles focused on creating a business friendly environment.

1. Private enterprise creates prosperity, not the government;
2. Prosperity and an expanding economy create jobs, not the government;
3. When businesses grow and expand, new jobs are created;
4. Planning for prosperity requires clearing away the barriers blocking business expansion.
5. Partisan politics have no place in times of economic crisis.
6. Now is not the time to blame for past mistakes.  Now is the time for creating a brighter future for Oregon.

1. Assess
a. Each legislator will identify 6 businesses in his/her district that may be ripe for expansion.
b. Each legislator personally interviews and builds a relationship of trust with the owners/CEOs.
c. Working with owners/CEOs, identify specific barriers to business expansion and benchmarks to gauge success.

This proposal is an attempt to set a new direction. “More of the same” cannot be Oregon’s motto for prosperity.  Either we legislators join together, evaluate what has and has not worked for Oregon in the past, and develop a strategy for action to improve our economic advantage, or we are cursed by our own intransigence.