Patriotic capitalists young, old, and in between, converged on Scio, Oregon on Wednesday, October 19th. They came to help the small town raise the funds to complete the construction of the “Big Red Pavilion” named after the now famous rooster who was a local fixture at the Feed Store and the town mascot.  The event was the brainchild of radio talk show host, Bill Post, from Salem, Oregon.  Bill was disgusted with the “Occupy” movement and the fact that they had come to his town of Salem when he blurted out, “let’s occupy Scio!” on his radio show .  He started a Facebook page called “Occupy Scio” that had nearly 1,000 “likes” by event day.  Scio Feed Store owner, Audie Heikkila, was a huge supporter of the event as were all the local businesses.   Bill was interviewed on the Glenn Beck TV show the day before the event.

Grassroots groups including the Oregon 912 Project, AFP, Freedom Works, and many small business owners and individuals set up their booths and sold books, toys, and baked goods offering all or a share of their proceeds to the cause.  Bill Post, with guest host, Jeff Kropf, conducted the 12:00 radio show on 1430 KYKN from the old Czech Hall in the heart of downtown Scio.  The crowd in the hall was entertained with instructions in the use of “OWS” (Occupy Wall Street) hand signals while the “occupiers” across the street at the Pavilion, spending their hard earned money in capitalist fashion, were listening to the show on loudspeakers.  There was a silent auction followed by a live auction after the conclusion of the radio show.  The local restaurants were running low on food by the time the event was winding down.  Over $3,500 was raised not counting the vendors share of the proceeds yet to be donated and we can’t overlook the boon to the local businesses that the “occupiers” occupied and patronized.   It was a great success, with a crowd of around 400 or 500.

It is heartwarming to see the outpouring of love and support for a small town and a good cause.   There were no whiners, complainers, losers, or “I want what you have”, “it’s not fair”, types in attendance.  There was no camping, drug use, or garbage left behind. The American Flag was proudly displayed.  We need to repeat this in many more small towns across Oregon.   Let’s give the “Occupy” movement a new meaning. 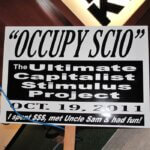 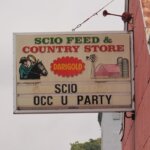 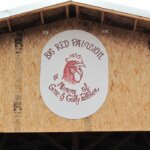 Diane is a native Oregonian and lives in SW Portland with her husband of 35 years. She ran for State Representative in HD 36 in 2010. She is a delegate for the Multnomah Co. Republican Party and is a member of the Oregon 912 Project. Diane has two grown daughters and 3 grandchildren who also reside in Portland.

A note from Diane: What also makes this story special for me is that my father was born and raised in Scio. Members of his mother’s family (Wesely family) owned the hardware store, the grocery store, and the theater (greedy capitalists). They were Czech and spoke no English when they arrived in the late 1880’s. They built magnificent homes, two of which are still there. We stopped by the Joseph Wesley house, built by Joseph himself (in 1912), when we were down there and the owner was gracious enough to take us through the home that is listed on Oregon’s National Register of Historic Places. The Czech Hall where Bill Post broadcast his radio show from is the same hall where my grandparents used to go to dances in the 1920’s. My father’s muscial group used to play in that hall. I still remember visiting Scio as a young child when we still had family there. There is a very rich history for me in Scio.