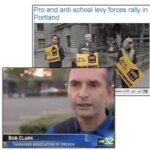 The average property tax bill increased about 2.3% this last November, 2011, relative to prior year’s bill for homeowners residing in the Portland Public School District (Oregon).[i]  This rate of increase is roughly in line with the estimated increase in Portland area incomes (between 2 and 4%), as measured by per capita income (U.S Bureau of Economic Analysis various preliminary reports).  By comparison, if last May’s Portland Public School (PPS) construction bond/tax measure had passed, property tax bills would have instead spiked by more than 10% year-over-year.[ii]

The following graph compares growth in average income versus growth in homeowner property taxes over the past ten years for the PPS area: 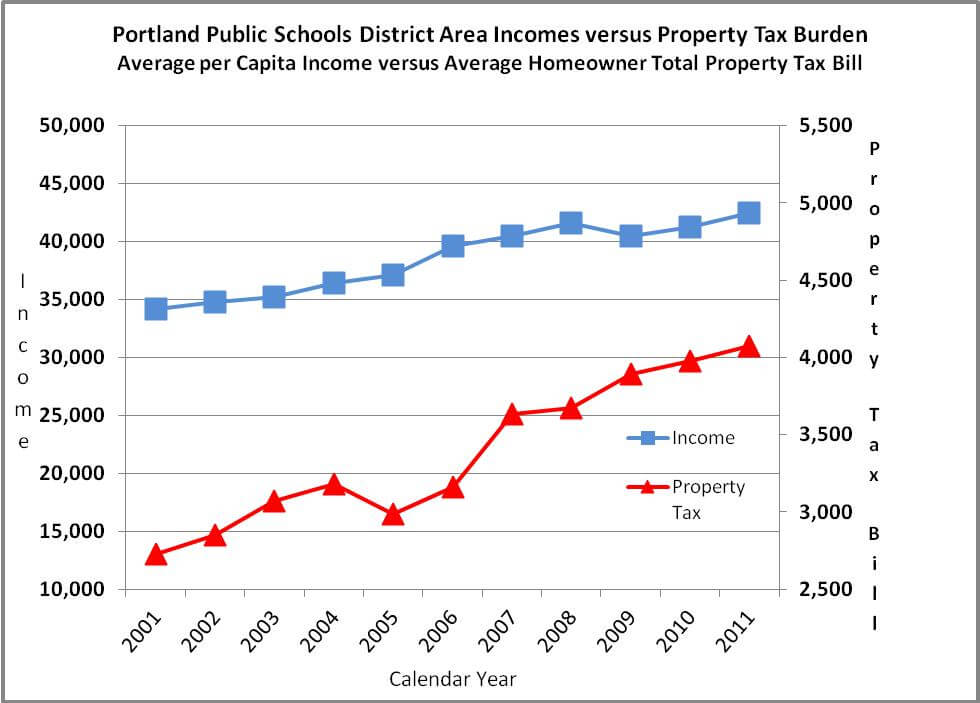 As shown, the average property tax bill has increased at a rate of about 4% per year over the last ten years, which is faster than the 2.2% average annual rate of increase experienced in PPS area incomes.

Measures 5, 47, and 50 helping to keep property taxes in check

Nearly 20% of PPS area homeowners experienced a decrease in their property tax bill in 2011, up from only 5% experiencing decreases in 2010 and 1% or less in previous years.  These decreases average nearly $400 per affected home in the year 2011 (see graph below).  Measures 5, 47 and 50 (the property tax rate limitations) held down property taxes for these homeowners who also experienced a rapid decline in the market value of their homes, as measured by the county’s market value assessment called real market value (RMV) on tax statements.   Most usually RMV does not enter into the calculation of one’s property tax bill.  RMV becomes a factor in the calculation of one’s property tax bill when local government property tax rates exceed $10 in total per $1k in RMV and/or educational levy rates exceed $5 in total per $1k in RMV (the property tax rate limitations).  What has happen to cause a rising number of homeowners a decrease in property tax bill is (1) increasing local government property tax levies and educational levies, and (2) a sharp decline in home prices of some 20 to 25% (2011 average home price in this subgroup versus its year 2008 average).  The resulting flattening in property tax bill is called “tax compression.”  A key ratio to watch for each homeowner is when the Tax Assessed Value (TAV) of one’s home exceeds roughly 70% of the market value of one’s home (RMV).  For the average home in year 2011 in the PPS area, this ratio stood roughly at around 68%.

It is very possible more PPS homeowners will experience decreases in property tax bills this next November, 2012, because of tax compression.  The S&P Case-Shiller house price index for the Portland Metropolitan area is down about 4% since last year at this time, and tax assessed value is otherwise allowed to increase 3% per year, such that more homes should obtain a TAV-to-RMV ratio of 70% or higher.

The increasing occurrence of tax compression is causing angst among local government and educational leaders.   A skeptic like me would say leaders should be proactive in limiting tax rate increases so as to not run-up against otherwise generous property tax rate limitations when the economy turns down and home prices slump.  Unfortunately, we instead get the Mayor of Gresham, for instance, reportedly asking the Governor to review changing the property tax limitations. 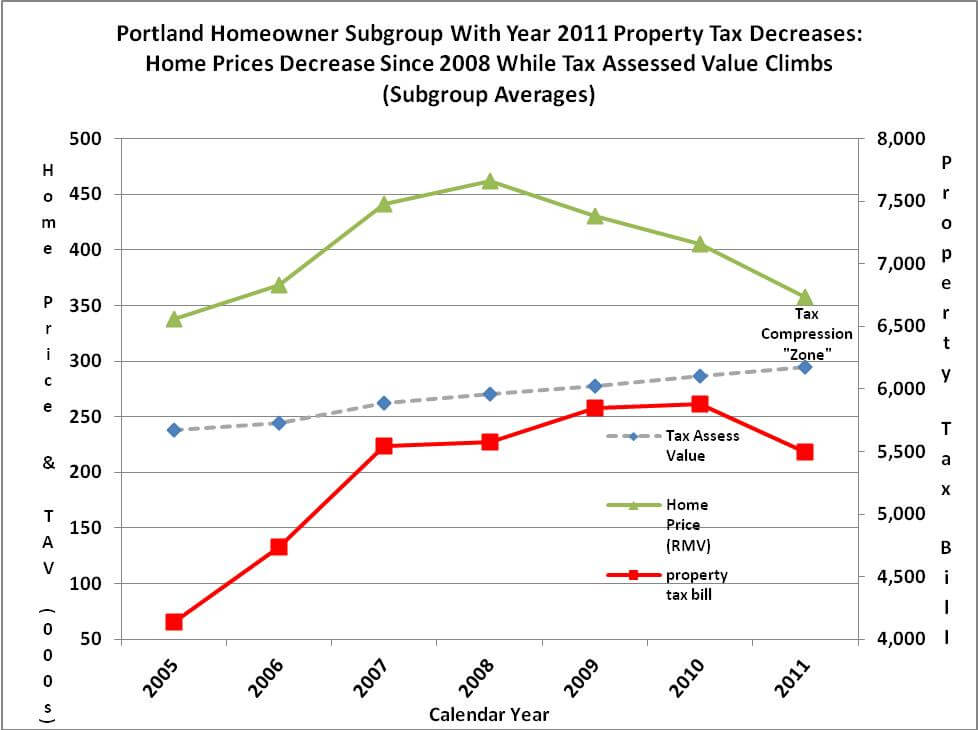 On the Horizon (Multnomah County Library and Portland Public Schools)

The only tax measure filed for this May’s (2012) Multnomah County election ballot is renewal of the existing library levy (89 cents per $1k in Tax Assessed Value).  The County plans to place on this November, 2012, ballot a measure to create a library district which would raise the library levy to $1.21 per $1k in Tax Assessed Value.  An increase in the library levy would likely result in reductions in the funding of other county government services and/or operations, because of the presence of tax compression.  Faced with cutting other government services, government leaders will no doubt plead vigorously for property tax reform and/or other forms of new taxation.

Portland Public Schools (PPS) is currently grappling with when to re-launch its school construction bond/property tax measure.  November, 2012, is under serious consideration.  However, in selecting November 2012, PPS may be competing with other state-wide (income related) tax measures currently being worked by public employee unions through the initiative process; and of course, there is already the aforementioned library district levy.  PPS might very well instead delay its school construction bond/tax measure till the May, 2013, ballot.  Either way, the PPS school construction bond/tax will not show up on property tax bills until November 2013 if approved.  As a sidebar, it is my sense PPS will come back with largely the same property tax rate proposal as last time, at a rate of $2 per $1k in tax assessed value.

[i] Based on a random sampling of approximately 400 homes in the Portland Public School District area; using property tax records available at http://www.portlandmaps.com/ (a city of Portland maintained website), Excel spreadsheet random number generator, and DEX phone book for the city of Portland.  Four hundred tends to be a routine sample size based on experience with other samples, and using the sample size formulae.  Other data from Multnomah County Tax Assessment office suggests the mean and median of this random sample is perhaps a tenth of a standard deviation on the high side.

[ii] Construction bond/tax measures are not subject to the property tax limitations presented in the next section of this article.