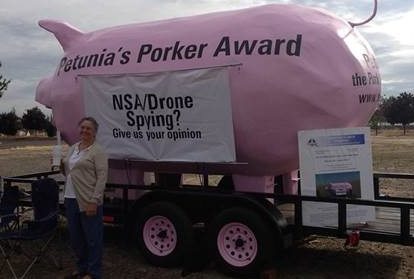 Petunia The Pork Detective sez: “It Pays to Sue the IRS!”

“It sure looks like the IRS granted our tax exempt status in response to our joining the ACLJ lawsuit because they communicated the approval of our application through the ACLJ and not our corporate lawyer or me as the Executive Director” said Kropf. “Normally, they would have notified Capitol Watch or our lawyer first, but it seems they are so embarrassed by such a high profile lawsuit they decided to send us notification through our litigation attorneys. I guess Petunia is right: it really does pay to sue the IRS.”

OCWF joined 40 other plaintiffs in 22 states represented by The American Center for Law and Justice in their amended filing in federal court in Washington D.C. alleging the constitutional rights of these groups were violated by secretly targeting these organizations because of their political beliefs.

“It’s really too bad that it took a lawsuit and citizen outrage about the obvious attempt at silencing our free speech to force the IRS to approve a simple tax exempt application” said Kropf. “I hope those responsible will now be held accountable for delaying our application for well over two years, when it should have taken just a few months to process and we intend to continue pressing our lawsuit to that end”.

Kropf noted that OCWF first applied for tax exempt status in May 2011 and only after joining the lawsuit was their application approved, some 27 months later.

“We also want to thank Congressman Greg Walden for looking into this situation on our behalf during this time period” said Kropf. “His staff did an excellent job keeping us informed of their conversations with the IRS about the delays in approving our application”.

The lawsuit alleges the defendants violated the First and Fifth Amendments to the US Constitution and several violations for of the Administrative Procedures Act. The Plaintiffs seek judgment by jury trial, compensatory and punitive damages, plus attorney fees. The ACLJ press release, original lawsuit and amended filing can be found HERE