Oregon Capitol Watch is running statewide television commercials starting today announcing this prestigious award to the Governor, along with a social media campaign, in an effort to educate the public about this issue.

“OCWF is stunned that Governor Kitzhaber is ignoring the tremendous amount of public information detailing the waste, cronyism and inaccuracies presented to the legislature by CRC proponents” said Kropf. “In spite of this and overwhelming public opposition from the right and left, he is asking legislators to put Oregon taxpayers on the hook for billions for a project that many think will be a financial disaster” 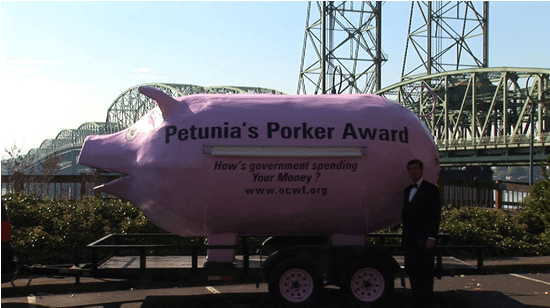 Petunia and OCWF Executive Director Rep. Jeff Kropf (Ret) at the I-5 Bridge

In addition to the 30 second television ad, OCWF has produced a 30 minute mini documentary detailing the problems with how this current I-5 bridge replacement proposal has been presented to decision makers in Oregon and Washington state. OCWF staff gathered publicly released information and analysis from such notables as respected economist Joe Cortright, forensic accountant Tiffany Couch and others. The  2 part mini documentary can be seen at www.ocwf.org

“Many legislators have no idea that the story they are being told is factually inaccurate according to the CRC’s own documents” Kropf said. “Our goal is to educate the public and the legislature to what is really going on here in an effort to stop this current proposal”.

Kropf noted that a similar grassroots effort aimed at dissuading the Washington Legislature from joining Oregon in building this boondoggle, was successful last year as they rejected the proposal for many of the same reasons that OCWF and several Oregon based grassroots groups oppose this project.