The Oregonian newspaper reported this week that it will be moving on Monday into its new office space in the Crown Plaza building at 1500 S.W. First Ave in Portland – two floors of office space “designed with a focus on journalism and sales in a digital age.” The Portland Tribune reported in March of this year that “The [Oregonian] has been downsizing and shifting its focus to the internet for several years.” 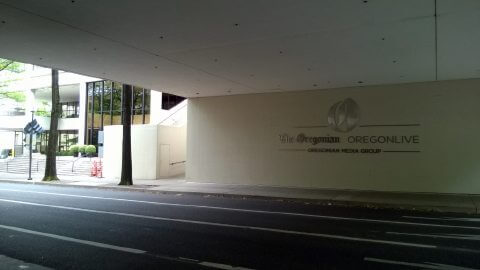 The Oregonian has sold their 1320 S.W. Broadway building.

The Oregonian will be sharing the Crown Plaza building with SAIF’s Portland office, the Oregon Medical Board, the Susan G. Komen Foundation and others. 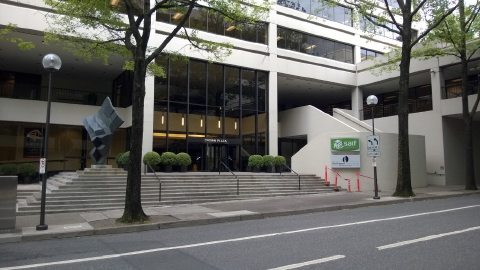 Three floors of Crown Plaza used to be home to the Portland FBI office, for 41 years from 1971 to 2012. From there the FBI investigated the November 1971 D.B. Cooper skyjacking case, and in May 1987 a gunman took five unarmed FBI agents hostage in Crown Plaza. During the rescue a bullet went into the Riviera Plaza Building across the street. 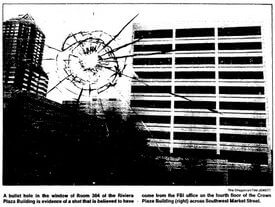 Departures at The Oregonian

Willamette Week reported yesterday that two more Oregonian veteran staffers had announced they were leaving. One of the veteran staffers sent an email to her colleagues letting them know that although she was leaving the Oregonian, she would continue to write, “sans metrics.” The “without metrics” comment was likely in reference to “steep new quotas for feeding the [Oregonlive] website.”

Willamette Week has reported on the shift at the Oregonian – from more serious journalism to a greater focus on getting online hits using “more reliance on press releases and links to stories from other media outlets,” and “gimmicks such as polls, news stories written solely about readers’ comments, and photo essays on such subjects as obese cats.”

That shift at The Oregonian was lampooned in an episode of Portlandia featuring George Wendt earlier this year.

In recent years, the Oregonian has lost other veteran journalists including Harry Esteve (to a communications job at PSU earlier this year) and Michelle Cole (to lobbying firm Gallatin Public Affairs in 2012).