I recently wrote an opinion piece for the Salem Statesman Journal and Oregon Catalyst on why people don’t trust the media. Over the weekend, a Statesman Journal reader wrote a letter in response to my opinion piece. He concluded his letter with this statement attempting to defend CBS for their “deplorable” (his words) protection of the Obama administration: “However, given the spectacular rise of Fox News catering to their market niche after President Reagan rescinded the ‘Fairness Doctrine,’ what are their competitors supposed to do?”

It conveyed a misconception I’ve heard before.

The misconception is that Fox News has a much larger share of the American news audience than they actually do. While Fox News certainly provides a welcome perspective for many conservatives, it is still an island in a sea of left-leaning news. And thanks to a new Pew study that came out last month – that’s not just the perception of many conservatives – it’s also in the results of the study.

Writing in the Washington Post on the Pew study, Aaron Blake conceded “There aren’t a whole ton of surprises here… most mainstream media outlets have a slightly left-of-center audience.”

The chart in the Pew study titled “Media Outlets by the Ideological Composition of Their Audience” is especially interesting: 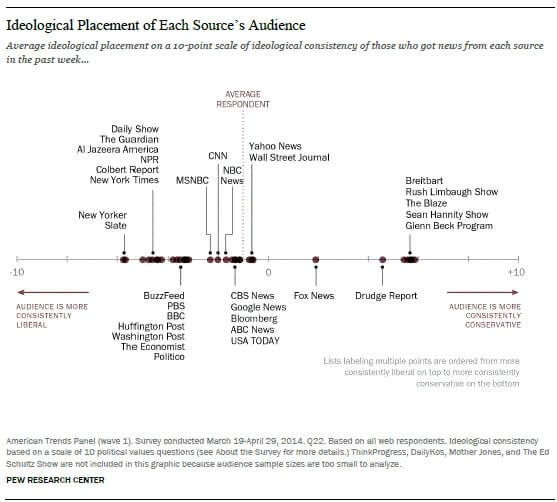 As the Washington Post headline says, the Pew study ranked “the media from liberal to conservative, based on their audiences.”

Using the ideology rankings from the Pew study along with recent TV news ratings allows for the creation of this table showing where Americans get their general news. 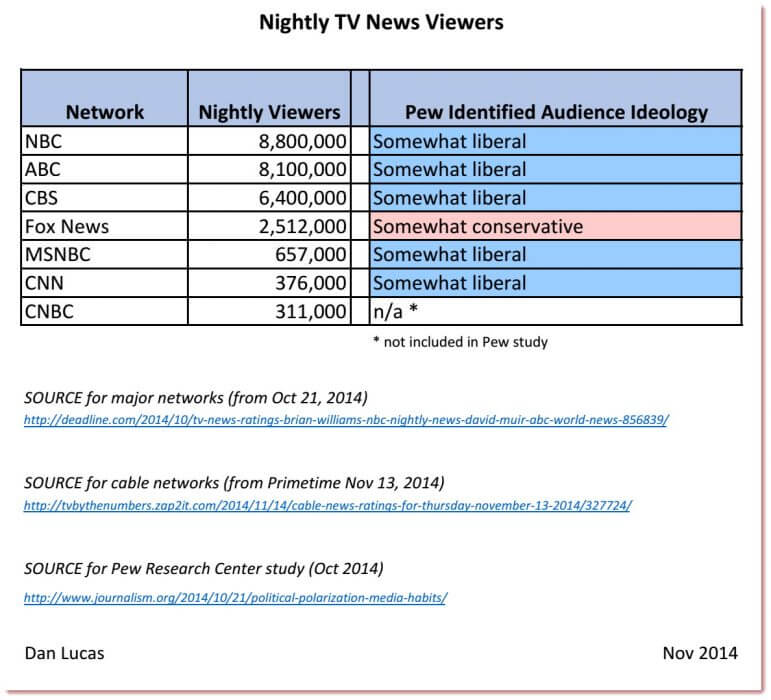 Sources of news about the government and politics

This chart was created using information from the Pew study. It shows where Americans go to get their news about government and politics, and whether those sources are liberal or conservative. 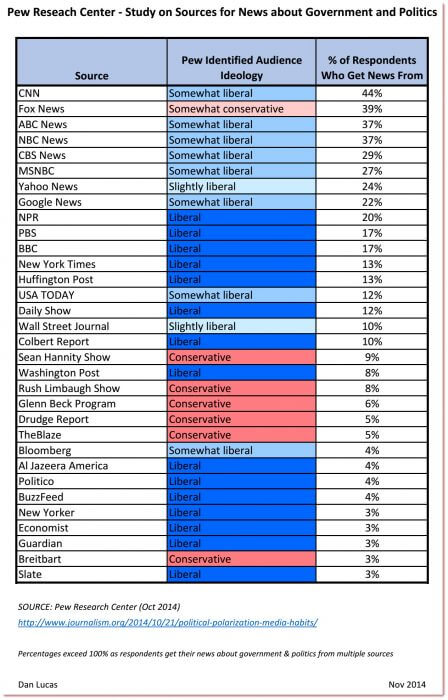 UPDATE: Liberal cultural critic Camille Paglia – July 29, 2015 interview in Salon: “I don’t demonize Fox News. At what point will liberals wake up to realize the stranglehold that they had on the media for so long? They controlled the major newspapers and weekly newsmagazines and T.V. networks. It’s no coincidence that all of the great liberal forums have been slowly fading. They once had such incredible power. Since the rise of the Web, the nightly network newscasts have become peripheral, and the New York Times and the Washington Post have been slowly fading and are struggling to survive. Historically, talk radio arose via Rush Limbaugh in the early 1990s precisely because of this stranglehold by liberal discourse.”