On Wednesday the State of Oregon’s Office of Economic Analysis released the final quarterly Oregon Economic and Revenue Forecast for 2015. The opening paragraphs of the executive summary of the forecast contain these hopeful signs:

That all sounds good, right? Unfortunately those upbeat statements belie some deeper realities in Oregon’s job and revenue picture.

The “big lie” continues. Looking beyond the simplistic and misleading unemployment rate, record numbers of Oregonians are out of the labor force. They’re retiring, waiting longer to enter the job market or giving up on looking for work.

That record number of Oregonians out of the labor force means that “Just three in five Oregon adults are in the labor market, leaving the smallest share of workers and job seekers supporting the population since officials started keeping track.”

The Oregonian reported in 2013 that “Oregon’s labor force participation is at a 40-year low: an average 63.2 percent in 2012.” The article attributed the decline to an aging workforce (which caused “about half of the drop”), “teens and 20-somethings waiting longer to enter the job market”, and the recession/discouraged workers. In August 2013 the Oregonian reported “Some workers are being forced to retire earlier than planned.”

It’s continued to go downhill from there.

The current October 2015 rate of 60.9% is lower than that previous lowest recorded point. 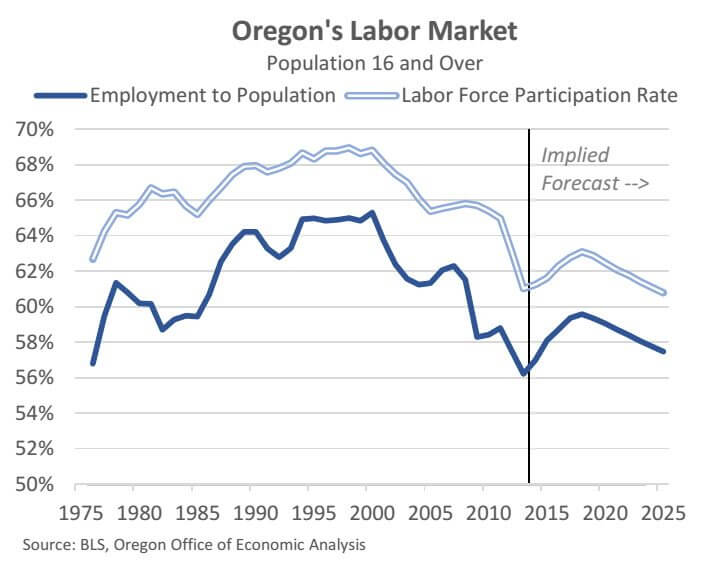 What does that mean? A June 2013 Oregonian article noted that a declining percentage of adults in the workforce “leaves fewer and fewer workers supporting Oregon’s population, weighing down a per-capita personal income that already lags the national average.”

Oregon’s revenue from income taxes is down, but Oregon is doing better at exploiting people’s addictions.

So if income tax revenues are down, then how can the current revenue forecast “climb $56 million beyond what was predicted over the summer?”

The Oregonian answers that: State Economist Mark McMullen “joked about ‘Sodom and Gomorrah,’ noting surprising growth in ‘sin taxes’ and other revenue sources associated with vice and traffic tickets. Beyond lottery sales — led by new video terminals that critics see as unfairly targeting problem gamblers and the poor — cigarette and alcohol sales are up.”

A Eugene-area Democrat was quoted straddling that ethical fence: “Rep. Phil Barnhart, D-Eugene, chairman of the House revenue committee, called the lottery gains ‘unfortunate’ even as he noted ‘the state depends on the revenues these gains produce’ to pay for schools, housing and other services.”