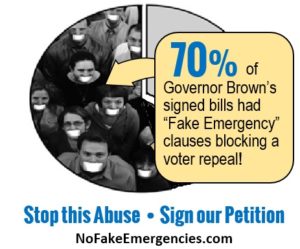 The Oregonian Editorial Board this week encouraged voters to back the “No Fake Emergency” petition which is in the final 24 days of the campaign. Please read the hard-hitting Editorial below and Email, Tweet and Facebook your friends to sign the petition here.

It’s human nature, we suppose, to exaggerate the importance of one’s work. And then there’s the Legislature. State lawmakers deemed more than half of the bills they passed during the most recent long session so important that they attached emergency clauses to them. Legislation modified in this fashion goes into effect much sooner than it would otherwise and — more importantly — is protected from people who’d like to place it on the ballot. Voters can be such a problem.

You get the idea: These and hundreds of other bills may, indeed, do good things. But do all of them really need to go into effect immediately rather than 90 days after the Legislature adjourns, as they would otherwise? Hardly.

The Trail Blazers license plate emergency was brought to our attention by Eric Winters, a Wilsonville attorney who’s trying to do something about the problem. Winters is a chief petitioner of Initiative Petition 49, the so-called No More Fake Emergencies Act, which would make it tougher for lawmakers to stick emergency clauses on bills. The signature-gathering effort to place the constitutional amendment on the November ballot is in the “home stretch” and will continue into early July, Winters says. If you haven’t signed the petition yet and have the opportunity, you should consider it.

While it’s easy to poke fun at some of the Legislature’s supposed emergencies, misuse of the emergency clause is sometimes not a laughing matter at all. Such was the case last year with Senate Bill 324, which removed the sunset date on the low carbon fuel standard. Ditto House Bill 2177, which provides that anyone who applies for a driver’s license is registered automatically to vote. Neither bill responded to a genuine emergency: The fuel standard had been stuck in neutral for years, and those affected by the “motor voter” bill already could register if they felt like it. Legislators use emergency clauses on these and other controversial bills, rather, in order to short-circuit their constituents’ referendum power, by which a law can be placed on the ballot — and held in abeyance — through the gathering of a sufficient number of signatures.

Normally, opponents of a given bill have three months to place it on the ballot. The number of signatures required to do this is equivalent to 4 percent of all votes cast for governor during the last general election. Gathering that many signatures in three months isn’t easy. It’s impossible to do so, however, when the law goes into effect immediately, which is what happens in a legislatively declared emergency.

To be sure, unhappy voters can still kill a piece of legislation. It’s just a lot harder. Citizens may propose an initiative that would repeal the offending law, as opponents of the low-carbon fuel standard did. To qualify for the ballot, though, they need half again as many signatures as they’d need to force a referendum vote — 6 percent of the total cast for governor during the last general election.

If a piece of legislation is forced to the ballot via referendum, a “yes” vote indicates support for the law. If an initiative to repeal the law qualifies for the ballot, a “yes” vote indicates a desire to kill it. To the degree that many people tend to vote “no” when in doubt, the initiative route is a much more difficult one. Legislators know this, of course, which is one reason they’re so fond of emergency clauses.

IP49 would not prohibit emergency clauses entirely. Applying them in most cases, rather, would require a two-thirds vote in both the House and Senate. The supermajority requirement would not apply, meanwhile, to biennial appropriation measures. Nor would it apply to bills passed during emergency sessions in response to disasters declared by the governor.

A natural tension exists between the initiative and referendum power of citizens and the lawmaking power of their elected representatives. Legislators have tipped the balance of power in their own favor over the years through the overuse of emergency clauses. Voters can, and should, reset the balance by supporting IP49.